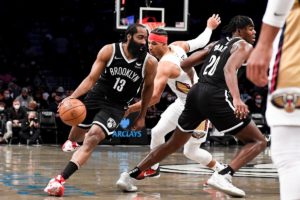 On Wednesday night, the Brooklyn Nets’ 12-game winning streak ended. The Nets will try to avoid losing consecutive games for the first time since November 13–15 when they host the New Orleans Pelicans tonight after losing to the Bulls 121–112 in Chicago.

Brooklyn was led by Kevin Durant, who hit 15-of-22 field goal attempts and finished one point shy of his season best with 44 points. The Bulls had six players reach double figures. Even though Durant had a season-high 28 points in the opening half, the Bulls still led 69-59 at the break. The Nets played catch-up the entire game and could never get over the hump. The Bulls scored 40 points in the first quarter, which set the tone for the remainder of the game.

Brooklyn, which has won 16 of its last 18, had not suffered a road loss since Nov. 25, when it was defeated 128-117 by the Pacers. Tonight marks the third and final game of the Nets’ current three-game road trip.  Durant had help on Wednesday from Seth Curry who scored 22 points and from Kyrie Irving. Irving added 25 points even though he made just one of his eight three-point attempts.

Tonight’s game will feature the Eastern and Western Conference Coaches of the Month. In December, Brooklyn head coach Jacques Vaughn won the award for the Nets’ success. New Orleans head coach Willie Green guided the Pelicans to a 10-5 mark in December and won the award in the West.

On Wednesday night against the visiting Houston Rockets, New Orleans jumped out to a 31-point lead in the second quarter and led by 25 points by the end of the third. Green began to rest some of his starters, but the Rockets kept cutting into the Pelicans’ lead. Houston closed the gap to 16 midway through the fourth prompting Green to bring back CJ McCollum and Jonas Valanciunas. McCollum led six New Orleans scorers in double figures with a game-high 28 points. Additionally, Valanciunas had 16 points and 17 rebounds.

The Pelicans would have been better off had they been able to rest their starters on Wednesday. New Orleans will still be without Zion Williamson who is out for at least three weeks with a strained hamstring. Brandon Ingram, the team’s second-leading scorer, has missed the last 19 games due to a bruised toe. He remains out of the Pelicans lineup.

The total has gone Under in four of Brooklyn’s last six games. New Orleans is third in the NBA in scoring and eight of their last 11 games have gone Over. The total has gone Over in 10 of the last 12 head-to-head meetings between these two teams. The last ten games have averaged a combined 242.2 points.