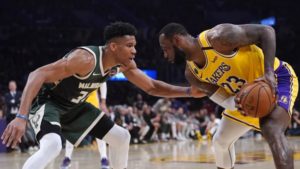 The Bucks are starting to catch momentum with seven wins in their last nine games. Tonight, they continue their West Coast road swing with a trip to Los Angeles. The Lakers have shown some improvement ever since Anthony Davis returned to the lineup. L.A. has won two of its last three games, but even with both Davis and LeBron James in the lineup, the Lakers needed overtime to beat the 24-30 New York Knicks. Beating Milwaukee will be a much tougher task.

James had missed five games before returning to the Lakers lineup and recording a triple-double against the Knicks. Davis scored 28 and had 17 rebounds and the big surprise for the Lakers recently, Malik Monk, added 29. The other surprise for Los Angeles is Russell Westbrook, but it’s not a good surprise. The former MVP scored just five points in the win over the Knicks and was actually booed at home. It was the second time in three games that Westbrook failed to reach double figures. That hasn’t happened often in his career. There are rumors floating around that Westbrook could be gone at the trade deadline.

The Bucks have won three of their last four games and in those four wins, Milwaukee won by an average of 20.5 points. In consecutive wins over Portland and the Los Angeles Clippers on Saturday and Sunday, the Bucks scored 137 points in each game. Giannis Antetokounmpo has been lighting it up and is averaging 28.9 points and 11.2 rebounds per game. Khris Middleton (19.4 ppg) and Jrue Holiday (18.0 ppg) are healthy and the Bucks are now second in the Eastern Conference standings. At 34-20, Milwaukee is just a game behind first-place Miami.

Milwaukee has controlled this series with the Lakers recently. The Bucks have won eight of the last ten games. That includes the first meeting this year. Milwaukee won 109-102 at home back in November. The Bucks do fairly well on the road. They have won 15 of 27 road games this season and the Bucks are 14-13 ATS in away games. More importantly, the Bucks are 31-13 when playing as the favorite.

The Lakers, on the other hand, struggle when playing as the underdog. In 20 games as an underdog this season, Los Angeles is just 5-15. They aren’t that good against the number at home either going 12-17 ATS in their 29 home games so far in 2021-22. The Lakers are, however, 4-1 ATS in their last five games overall. The Bucks have an identical 4-1 ATS mark in their last five.

The total has gone Under in each of the last six Bucks-Lakers games. In the last ten meetings, the average total has been just 218.1 and the Under cashed in eight of those ten. The Lakers are No. 1 in possessions per game. Milwaukee is ninth. Both teams have seen the Over hit in four of their last five games.