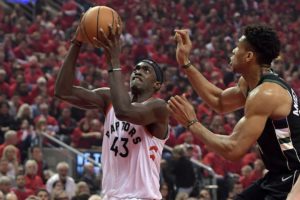 The Toronto Raptors are hoping that a six-game home stand can turn around their recent difficulties. The extended home stand begins tonight against the Milwaukee Bucks. The Raptors have lost nine of their last 12 games, including five straight at home, after losing to the Indiana Pacers 122-114 on Monday in Indianapolis.

Pascal Siakam, who had 26 points on Monday, understands that tonight can represent a turning point for the Raptors. Toronto’s last two wins have come against good teams – Phoenix and Cleveland – and the Raptors won those games by nine and 11, respectively.

The Bucks have recently experienced some issues as well. Before beating the visiting Washington Wizards 123-113 on Tuesday, they had dropped five of their previous six games. Giannis Antetokounmpo scored 19 of his career-high 55 points in the fourth quarter.

After missing a game due to a knee injury, Antetokounmpo was back in action last night. In his last three games, he has scored 40 points or more, totaling 143 points over that time. The three-game total beats Flynn Robinson’s 129 points from February 1969 to set a new Bucks franchise record. He also had two steals, seven assists, and 10 rebounds.

Jrue Holiday, who missed the last three games due to sickness, was also back in the starting lineup for the Bucks on Tuesday. In 19 minutes off the bench, he scored six points. For Milwaukee, Brook Lopez recorded 21 points and 12 rebounds, and backup Bobby Portis chipped in with 17 points and 13 rebounds, which was his 22nd double-double of the season. George Hill of Milwaukee missed his third consecutive game due to a non-COVID sickness.

The teams will play one another for the first time this season tonight. Last year, Toronto swept Milwaukee winning all three games between the two teams. The Raptors also covered the spread in all three games giving Toronto a 5-0 SU and ATS record against the Bucks in the last five head-to-head meetings.

On Monday, the Raptors’ starting lineup included Precious Achiuwa and Fred VanVleet who were back in action after missing time. Achiuwa missed seven weeks of play due to a sprained right ankle, while VanVleet missed two games due to a back issue.

In slightly more than 36 minutes on Monday, VanVleet scored nine points. In 12 minutes, Achiuwa scored three points and blocked three shots. The Raptors’ bench was awful in the loss to Indiana. The Pacers outscored Toronto’s bench 54-7. That needs to change if the Raptors are to have a chance at beating the Bucks tonight.