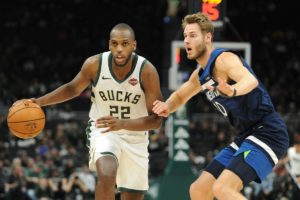 The Milwaukee Bucks are hoping to make club history when they meet the Minnesota Timberwolves on Friday night. The Bucks’ 116-91 thumping of the Detroit Pistons on Wednesday gives the Bucks a 7-0 record, which equals their best start in franchise history. Milwaukee can make franchise history with a victory over Minnesota tonight.

The league’s only unbeaten team has been driven by star Giannis Antetokounmpo, who has six straight games with at least 30 points, tying a career-high. Antetokounmpo scored 32 points and pulled down 12 rebounds in the win over Detroit on Wednesday. He currently scores 33.6 percent,  shoots 56.9 percent, grabs 12.7 rebounds, dishes out 5.0 assists, adds 1.7 blocks, and 1.1 steals a game.

The Bucks are shorthanded due to the injuries to Pat Connaughton (calf) and Khris Middleton (left wrist surgery), but players like point guard Jrue Holiday have stepped up throughout the team’s strong start. Holiday has scored 28.3 points on 58.5 percent of his shots during his last three games. Additionally, he ranks 10th in the league with 7.6 assists per game.

Minnesota, which enters the first game of a four-game home stand with a record of 4-4, has lost its last two meetings with Milwaukee. After falling to the Phoenix Suns on Tuesday by a score of 116-107, the TWolves are looking to snap a two-game losing streak.

The Timberwolves went into the season with great expectations after obtaining Rudy Gobert from the Utah Jazz. The team’s starting lineup, though, has had a hard time adjusting. The likes of D’Angelo Russell, Jaden McDaniels, Karl-Anthony Towns, Anthony Edwards, and Gobert occasionally appeared outmatched against Phoenix, which had a lead of up to 18 points in the third quarter.

Russell’s current field goal percentage of 39.4% and 3-point percentage of 27.9% are both career lows. He managed just five points on 2-for-8 shooting in the loss to Phoenix. Chris Finch, the head coach of the TWolves, believes Russell just needs to remain confident in his shot.

A bright spot for Minnesota has been Edwards, who averages 23.1 points, 6.1 rebounds, and 4.0 assists while shooting 44.9 percent from the field. He is the Twolves leading scorer. Naz Reid, Minnesota’s backup center, is also a plus. The fourth-year veteran scored 13 points on 5-for-6 shooting and added three rebounds while playing nearly 16 minutes off the bench against the Suns. Reid is demonstrating that he merits more playing time in the Wolves’ congested frontcourt.

Even though the Bucks are undefeated, tonight’s game will be just their second on the road this year. The Bucks have won 12 of their previous 16 games versus Minnesota and are 6-1 ATS in their last seven contests. In their last nine games, the TWolves are 3-6 ATS.

The total has gone Under in five of Minnesota’s last six games. The Under is 6-3 in the Twolves last nine home games and 8-4 in the last 12 games against Milwaukee at home. Overall in the series against the Bucks, the Over is 5-2 in the last seven games.