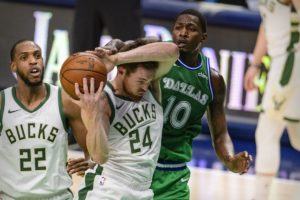 The Milwaukee Bucks and Dallas Mavericks face off against each other tonight in Dallas. Both teams are riding three-game winning streaks. On Wednesday night in Milwaukee, the Bucks defeated the resurgent Sacramento Kings 126-113. Giannis Antetokounmpo led the way with 35 points, seven assists, and six rebounds. Antetokounmpo tied Kareem Abdul-Jabbar for the most 30-point games in a row with eight, breaking the Bucks franchise record.

Milwaukee’s Jrue Holiday also put on a strong performance, scoring 31 points and dishing out six assists. Antetokounmpo spent time on the bench due to foul trouble in the third quarter while Holiday played the entire period and scored 13 points.

Dallas recently defeated the Nuggets by a score of 116-115 in Denver on the second night of a back-to-back. Tim Hardaway Jr. went 6-for-8 from behind the arc and finished the game with 29 points, making it a rare game in which Luka Doncic did not lead the Mavericks in scoring. The Mavs leading scorer went 5-for-17 and did finish with a triple-double with 22 points, 12 assists, and 10 rebounds.

With Khris Middleton’s return last Friday, the Bucks are almost fully healthy. Joe Ingles, who was recently assigned to the G-league affiliate Wisconsin Herd in order to get more practice time, has yet to make his season debut. The Bucks added Thanasis Antetokounmpo and rookie Marjon Beauchamp to the roster on Thursday. Middleton is only averaging 12 points per game since his return, but his presence makes the Bucks better.

Milwaukee defeated Dallas 124-115 in their first meeting this season. This is their second and final meeting of the 2022-23 season. In each of the two previous seasons, the Bucks and Mavs have split a two-game series.  The Bucks won 102-95 in their lone game played in Dallas last year.

Dallas is 4-1 SU and ATS in its last five games. They are 9-2 SU in their last 11 games at home. Dallas ranks fourth in the NBA in scoring defense. The total has gone Over in five of the last six Mavs’ games. Dallas has a 15-9 O/U record for the season.