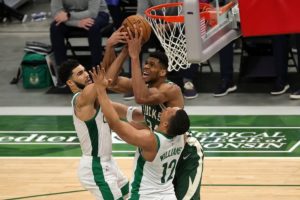 Playoff teams that win games on the road can be successful in the NBA. Milwaukee did just that in Game 1 of its conference semifinal series with Boston. The Bucks gave Boston a heavy dose of something the Celtics do very well – defense. Milwaukee packed in the paint and forced the Celtics to shoot from the perimeter. The strategy worked well for the Bucks; not so much for Boston.

The Celtics would shoot just 33.3 percent from the floor. Milwaukee clogged up the interior of the defense that Boston was forced to launch 50 three-point attempts. They only made 18 – 36 percent – and that will have to change if the Celtics are going to win in Game 2.

It didn’t help that Boston’s two top scorers – Jayson Tatum and Jaylen Brown – shot a combined 10-of-33 from the floor. Then, you add in the Celtics’ 18 turnovers and you get exactly what happened – a 101-89 Boston loss at home in Game 1. The Celtics are probably lucky they didn’t lose by more than 12 points.

It might have been worse if Milwaukee would have actually shot better too. The Bucks only hit 35.3 percent from the field, otherwise, they may have beaten Boston by 20-plus. But, the Bucks did what they have done best for the last several games. Milwaukee has now won four straight and they have done it with defense. The Bucks have allowed just 91.2 points per game over the last four.

Boston is going to have to find a way to come up with some offense against this Milwaukee defense. That is entirely possible too. Don’t forget, Tatum scored 42 points in one of the four regular season games these two teams played this season.

Sunday’s Game 1 loss was the first for Boston in six games. It was also the first Celtics loss at home in five games. Milwaukee is now 5-1 SU in its last six games and 12-6 SU in its last 18 against Boston. The Bucks covered the spread in Game 1 which makes them 4-1 ATS in their last five games. The Game 1 cover was the first time Milwaukee covered the number against Boston in eight games (1-7 ATS) against the Bucks.

Milwaukee has seen the total go Under in its last six games in a row. The total has gone Over in 12 of Boston’s last 17 games. The Over is the trend in the Bucks-Celtics series with eight of the last ten going Over the total. Those last ten games between the two teams have averaged a total of 232.6 points. Game 1 was nowhere near that.

Both teams are likely to change their game strategy tonight. Combined, the two teams hoisted up 84 three-pointers in Game 1 and neither team shot that well from behind the arc. Khris Middleton remains out for Milwaukee. Marcus Smart, the NBA’s Defensive Player of the Year, is listed as questionable with a quad injury.