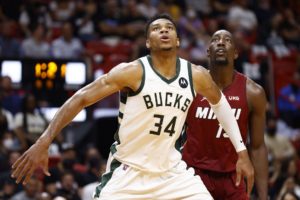 Miami has won four straight and nine of its last ten games. The Heat sits atop the Eastern Conference standings and head into Milwaukee tonight as a four-point underdog. The Heat have proven they can play in the underdog role. Miami is 11-7 SU in 18 games as the dog. They are also 6-for-6 in their last six road games, but they will be without Kyle Lowry tonight who is out for personal reasons.

Milwaukee got a much-needed win over Charlotte on Monday night beating the Hornets 130-106. In their previous five games, the Bucks had just one win. Over their last six games, the Bucks have a 1-5 ATS record and in their last 12 games against Eastern Conference opponents, Milwaukee has covered the spread just three times. The Bucks will also be down a point guard as George Hill has been ruled out for tonight due to a neck issue.

The teams have played three times already this season and the Heat holds a 2-1 lead thus far. None of the three games has been that close with scoring margins of nine, 22, and 42 points. The home team has won each game and covered the spread. In the last ten games in the series, Milwaukee holds a 7-3 SU advantage. The Bucks have also won four of five over the Heat in the last five games played in Milwaukee.

The Bucks could have issues with the Miami defense which ranks fifth in the league in points allowed per game (104.7). In their two wins over Milwaukee, the Heat held the Bucks to 104 and 95 points. That’s below the Bucks season scoring average of 113.6 which ranks fifth in the NBA. Over their last four games, Milwaukee has averaged over 125 points a game and scored at least 120 in each of the four.

Despite the strong defense, Miami trends Over. They actually have one of the highest Over percentages in the NBA. For the season, the Heat’s O/U record is 37-25. On the road this year, that mark is 21-13 and the total has gone Over in eight of the last 11 Miami games against Eastern Conference teams.

Milwaukee has seen the total go Over in 10 of their last 12 games overall. The Over has also hit in four of the last five Bucks home games. In the head-to-head series, four of the last six Heat-Bucks games have gone Over. This season, the three games so far have averaged 225 points. The one game in Milwaukee this season produced a total of 226 (Milwaukee won 124-102). That puts the teams right in line with tonight’s total of 226.5.

The difference could come down to which team shoots better. Miami is 13th in the league in overall field goal percentage. The Bucks are 14th. Miami has a slight edge in three-point percentage – 37.3 to Milwaukee’s 36.2, but the Bucks take more three-point attempts than the Heat.