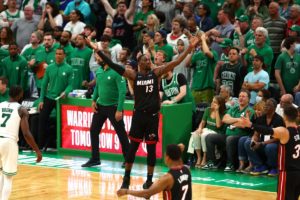 Statistically, Miami should be trailing in this series 0-3 as the Heat have been outplayed by Boston far more often than the other way around. Still, Miami has strung together a handful of good quarters and with a 109-103 win in Game 3, the Heat leads the series 2-1

Miami led in Game 3 by as many as 26 points, but Jimmy Butler went out in the second half with an injury and the Heat managed just 22 points in the fourth quarter. Boston was able to battle back and make it close. Now, heading into Game 4, both teams have some injury issues

Butler left Game 3 with a knee injury, but it appears he will play tonight. Kyle Lowry, Tyler Herro, P.J. Tucker, and Max Strus are all listed as questionable for Miami tonight. Lowry, who missed four playoff games already, scored 11 points, had six assists, and had four steals in Game 3. He was a key to a Miami defense that created a lot of havoc for the Celtics

It’s a similar situation for Boston who lists Jayson Tatum, Marcus Smart, and Robert Williams III on the injury report. Tatum is probable with a cervical strain. Smart and Williams are both questionable with ankle and knee injuries, respectively. Tatum needs to play better than his 10 points in Game 3. Luckily, Jaylen Brown made up for it with 40 points

Miami’s defense will try and continue to do what it did in Game 3. The Heat forced 24 turnovers that turned into several Heat points. If not for the points off turnovers, Miami probably doesn’t win Game 3. Boston shot better from the floor and attempted double the amount of free throws that the Heat did. What Boston has been unable to do consistently is string together four quarters of solid basketball. The one time they did that the Celtics won. That was in Game 2

Game 4 will feature the highest total of the series so far – 208. What was predicted to be a defensive series featuring two of the best defenses in the NBA, has watched as all three game totals have gone Over. Boston is shooting extremely well – 55 percent from the field and 40 percent from behind the three-point arc. The three games in the series have averaged 222 points

In Miami’s series with Philadelphia, the Heat held the Sixers under 100 points four times. Boston held Milwaukee under 100 three times. In all three games of this series, each team has scored at least 102 points.