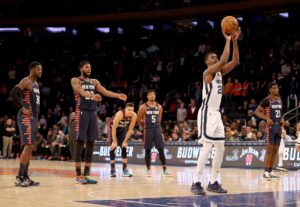 Not too many NBA teams have been as hot as the Memphis Grizzlies. Memphis has risen to third in the Western Conference standings thanks to a 16-4 record in its last 20 games. Tonight, the Grizzlies will travel to New York to take on the Knicks. Memphis has done equally as well on the road recently. The Grizzlies are 16-9 in road games this season.

Memphis had won three straight until running into a shorthanded but hungry Sixers team that beat them 122-119 on Monday night. New York enters tonight having won just once in its last four games. That win came on Monday night as the Knicks beat the 18-34 Sacramento Kings 116-96. Alec Burks led the Knicks with 21 points against the Kings. He was one of six New York players to score in double figures.

What has been driving the Grizzlies has been the play of All-Star guard Ja Morant. On Monday night, Morant once again went for 30-plus points pouring in 37 in the loss. It was the seventh straight game in which Morant scored 30 or more points. Teammate Desmond Bane added 34 for Memphis. For the season, Morant averages 26.4 points, 6.8 assists, and 6.0 rebounds per game. Bane averages 18.1 points and Dillon Brooks scores 18.1. Memphis is fourth in scoring offense, averaging 112.1 points per game.

The Grizzlies have tremendous depth, which is another reason for their recent stretch of wins. Morant, Brooks, Bane, and Jaren Jackson Jr. (16.4 ppg) all average in double figures. Four more Grizzlies average between eight and 10 points – Brandon Clarke (9.9), De’Anthony Melton (9.7), Tyus Jones (8.1), and Kyle Anderson (8.0).

The Knicks are nowhere near the offensive team that Memphis is. New York is ranked 27th in scoring offense, averaging just 104.1 points per game. In four of their last eight games, the Knicks failed to reach 100 points. They have just two wins in those last eight games. In both victories, the Knicks scored at least 110 points.

What the Knicks do have though is the league’s fifth-best scoring defense. New York allows 104.6 points per game which is what has kept the Knicks in some games. The defense has played well at home where the Knicks are 8-2 ATS in their last ten games.