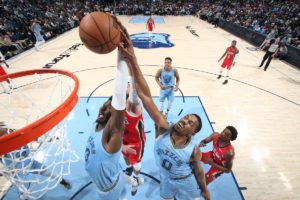 The New Orleans Pelicans defeated the Houston Rockets 119-106 on Saturday night after their lowest scoring output of the season last Thursday in a loss to Portland. The Memphis Grizzlies travel to New Orleans tonight looking to avenge their lowest-scoring game of the year. Meanwhile, the Grizzlies are the No. 4-ranked scoring team in the NBA followed by No. 5 New Orleans.

The Pelicans’ offensive performance against the struggling Houston Rockets was far better than their 95-point performance in an 11-point defeat to Portland on Thursday. New Orleans shot 41.8 percent against Portland in a 106-95 loss.

Against Houston, New Orleans encountered challenges along the way, losing an eight-point fourth-quarter advantage after holding an 18-point lead after the third quarter. Pelicans head coach Willie Green said his team let the foot off the gas as they trailed 98-90 with nine minutes left in the game.

Despite their ups and downs, the Pelicans are now one game above.500 (7-6) and are happy with their overall performance.

Pelicans guard CJ McCollum, New Orleans’ third-leading scorer, has struggled recently with his shooting. He has shot 27.3 percent from the field and 16.7 percent from outside the arc in his last four games. That cannot continue if the Pelicans want to win games. Leading scorer Zion Williamson is averaging 23.5 points per game. He scored 29 in the loss to Portland and 26 in the win over Houston. Despite having some strong talent, Green is still trying to figure out the best rotation for New Orleans.

In the 2019 draft, Williamson was the first overall pick. The second pick was Memphis’ Ja Morant and the two NBA stars will meet for the first time in two seasons. Morant and teammate Desmond Bane did not play on Saturday due to injuries. Memphis lost to Washington 102-92. Without Morant or Bane in the Grizzlies lineup, Memphis is now 0-3 this season. When both are in the lineup, Memphis is 9-2.

The loss to the Wizards was the result of poor shooting as well as Memphis not having its two top scorers. Washington hit a season-high 19 three-pointers while the Grizzlies shot 9-of-28 from behind the arc. In the loss, Dillon Brooks, who is the Grizzlies’ third-leading scorer, scored 19 points and former Pelican Steven Adams added 12 and 10 rebounds. Morant and Bane account for 53.5 points per game and not having the two was just too hard to overcome.

Only twice this season have the Grizzlies scored less than 100 points, and the loss to Washington was one of them. New Orleans is playing the third game of a six-game homestand, while Memphis is wrapping up a brief two-game road trip.

Neither team has been that strong against the number so far this season. Memphis is 5-2 SU in its last seven games, but the Grizzlies are just 3-6 ATS in their last nine. In their last 10 games against New Orleans, Memphis is 3-7 ATS.

New Orleans is just 2-5 ATS in its last seven games. The Pelicans are 2-4 ATS in their last six games at home.