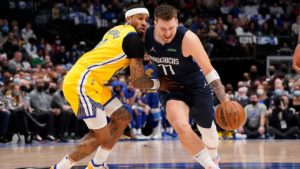 The Dallas Mavericks are off to a great start in 2022. The Mavs are now 10-2 since the calendar turned over to the New Year. Tonight, Dallas will face a Golden State team they have beaten once already. The Mavs beat the Warriors on Jan. 5 in one of their better defensive performances of the season. Dallas won that game 99-82.

Dallas has had to navigate through their injuries and COVID illnesses, but they have found that guard Jalen Brunson is a player. Brunson is averaging 15.8 points per game behind the Mavs top two – Luke Doncic (25.6 ppg) and Kristaps Porzingis (19.9 ppg). The Mavs have a strong scoring lineup and one of the NBA’s best defenses. That could spell trouble for Golden State.

The Warriors welcomed back Klay Thompson to the lineup recently, but he did not play over the weekend. Golden State will be extra careful with Thompson since he missed the last two seasons with injuries. He is listed as questionable for tonight. Draymond Green continues to be out for the Warriors and that is a big problem, especially defensively.

Golden State (34-13) has struggled at times without Green. The Warriors somehow managed to beat Utah 94-92 on Sunday without Thompson and Green. It was Golden State’s second straight win after having beaten Houston 105-103 in the previous game. Interestingly, the Warriors are one of the better NBA teams against the number this season. They are 25-19-3 ATS on the season, however, in games after a straight-up win Golden State is 16-17 ATS.

Dallas has won five of its last six games. The only loss was to the team with the best record in the NBA – the Phoenix Suns (37-9). In four of the five wins, Dallas allowed 98 or fewer points. The Mavericks rank third in points allowed per game this season. Dallas gives up 102.5 points a game. The Mavs also rank fourth in defensive efficiency.  In their last ten games, the Mavs have given up more than 100 points just four times with the 109 scored by Phoenix as the most.

Golden State is, of course, the No. 1 defense in the NBA. The Warriors allow 101.9 points per game and they rank first in defensive efficiency. They have held four of their last ten opponents to fewer than 100 points, but they allowed 121 to Indiana, 119 to Minnesota, 118 to Milwaukee, and 116 to Memphis. Those were all losses.

The Warriors are just 3-8-1 ATS in their last 12 games. Dallas is 9-2 ATS in its last 11 games against Golden State. With its defense, it makes sense that Dallas trends Under. Each of the Mavs’ last eight games has gone Under the total. Three of the last four Warriors games have seen the total go Under, but the Over has hit in 10 of the last 13 Mavericks-Warriors games.