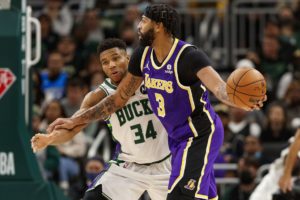 Giannis Antetokounmpo fouled out with a minute remaining, but the Milwaukee Bucks got a three-pointer from Grayson Allen and defeated the New York Knicks 109-103 on Wednesday night. After a night off, the Bucks now host the Los Angeles Lakers.

Despite fouling out on Wednesday, Antetokounmpo led the Bucks with 37 points on 13-of-25 shooting. He also recorded 13 rebounds and seven assists. Both of those were team highs. Teammates Jrue Holiday and Bobby Portis added 22 points while Pat Connaughton had 10. Allen ended with 11 with his only three-pointer of the night being the game-winner. Allen had gone 7-for-7 from three-point range in the Bucks’ win over Dallas last Sunday.

It will be a big night in Milwaukee as Khris Middleton is expected to make his season debut. He is listed as probable on the injury report. Middleton hasn’t played since Game 2 of Milwaukee’s first-round playoff series with the Chicago Bulls last year due to a wrist injury. He was an All-Star last season for the third time in his career and he averaged 20.1 points, 5.4 rebounds, 5.4 assists, and shot 44 percent from the field.

The Lakers, who have struggled this season, beat Portland at home 128-109 on Wednesday. LeBron James led L.A. with 31 points, shooting 6-of-8 from three-point range. Anthony Davis had 27 points and 12 rebounds while Austin Reaves added 22. Lonnie Walker IV didn’t play on Wednesday due to a foot injury. He is third on the team in scoring averaging 16.6 points per game.

Davis leads the Lakers in scoring (26.3 ppg), rebounding (12.7 rpg), steals (1.5 spg), and blocked shots (2.3 bpg). Russell Westbrook leads the team in assists (7.2 apg). The Lakers’ 18th-ranked defense will contend with the Greek Freak who is averaging 31.3 points and 11.5 rebounds per game for the Bucks. Milwaukee’s Brook Lopez continues to lead the NBA in blocks with 2.8 per game.

Tonight’s game marks the first of six road games for the Lakers. All six are against Eastern Conference opponents. Los Angeles has won three of its last four games and six of its last eight. The road trip comes at a good time as the Lakers struggled early in the season.

The Bucks have won their last three straight, beating Cleveland, Dallas, and the Knicks. Milwaukee is playing very well at home with 11 wins in their last 13 games at the FiServ Forum. That’s bad news for the Lakers who are just 3-11 SU in their last 14 road games.

The Under is 4-2 in the Lakers’ last six games. Four of the last five Bucks’ games have gone Over the total.