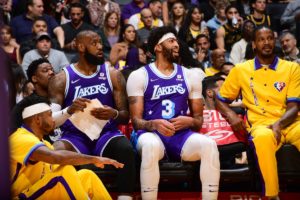 LeBron James had some help when he led the Los Angeles Lakers to the NBA championship in the Orlando bubble two years ago. Kentavious Caldwell-Pope, a 3-point shooter and elite defender, was one of the Lakers’ crucial supporting cast members. Los Angeles could use Caldwell-Pope tonight given how this year has started. Instead, when the Los Angeles Lakers go to the Denver Nuggets on Wednesday night, they will play against him.

The Lakers have dropped three straight to start the new season. One of the big reasons why is the team’s subpar shooting. Los Angeles ranks dead last in the NBA shooting 40.7 percent. Only three of the Lakers’ starters consistently outperform the team average.

Russell Westbrook, who was acquired from Washington in the 2021 summer trade that sent Caldwell-Pope to the Wizards, is making just 28.9 percent of his attempts. Anthony Davis leads L.A. shooting 50.9 percent from the floor. Westbrook is actually questionable for tonight’s game with a hamstring injury.

Denver, which leads the league in shooting percentage at 50.1, will test the Los Angeles defense, which has been strong so far. The Nuggets’ defense, on the other hand, needs some improvement as they give up an NBA-worst 124.5 points per game. Denver gave up 44 points against the Trail Blazers in the third quarter of their game with the Trail Blazers on Monday night. The Nuggets allowed 80 points in the second half and ended up losing 135–110 in Portland.

Denver has split its first four games, which included a memorable victory over Golden State on Friday night. Michael Porter, who missed most of last season with a back injury, has been a bright spot for Denver. He is shooting 50 percent (16-of-32) from three-point range and his defense has been outstanding. Nuggets head coach Michael Malone has been very happy with Porter and especially his defense.

Two-time NBA MVP Nikola Jokic had a rough night against the Trail Blazers on Monday. He scored just nine points but had nine rebounds and nine assists. His averages for the season are 20.2 points, 10.2 rebounds, and 9.5 assists. Caldwell-Pope averages 11.5 points, 3.8 rebounds, 3.5 assists, and shoots 47.6 percent from beyond the arc. He was acquired from Washington in the off-season as part of the deal that sent Will Barton and Monte Morris to the Wizards.

In three games last year, Denver beat the Lakers twice. The Nuggets covered in two of the three games and all three games went Over the total. In the last ten head-to-head meetings, the Over has been a trend going 7-3. Three of Denver’s four games this season have gone Over as well. Remember, the Nuggets are giving up 124.5 points a game while scoring 115.5.

Neither team has been all that strong against the number recently. The Lakers are just 4-8 ATS in their last 12 games. They are just 2-11 SU in their last 13. Denver is 3-7 both SU and ATS in its last 10 games.