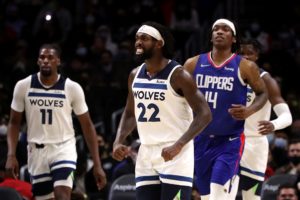 The Clippers and Timberwolves played three times at the beginning of the 2021-22 season. Los Angeles won all three games and wound up winning the season series 3-1. The Clippers won both games at Minnesota and with Paul George back in the lineup L.A. is a serious threat to advance. The Clippers are 18-13 in games that George has played in this season.

The TWolves are the top scoring team in the NBA averaging 115.9 points per game. They have been outstanding since the calendar flipped to 2022. Minnesota finished the regular season with 13 wins in its last 20 games. That includes a 12-2 SU mark against teams from the Western Conference. The TWolves were a solid 26-15 SU at home and they were one of the better cover teams in the league with a 43-38-1 ATS mark, 22-18-1 ATS at home.

The Clippers have the type of team that will make things difficult for Minnesota. For one, L.A. can take TWolves leading scorer Karl-Anthony Towns out of the equation. They’ve proven they can do that this season as Towns has scored just 15.3 points in three games against the Clippers. George and Robert Covington are two of the better wing defenders in the NBA. Both have made NBA All-Defensive teams in the past and both can make life difficult for Minnesota’s Anthony Edwards, who averages 21.3 points per game.

The biggest issue for Minnesota is its defense. The TWolves rank 23rd in points allowed per game (113.3). In their final seven games of the regular season, Minnesota allowed 121 or more points in each game. They went 3-4 SU in those games. The TWolves rely on their offense to outscore opponents and that could be a problem tonight.

Minnesota leads the NBA in pace, but tonight’s game is likely to slow down closer to the Clippers’ pace. L.A. ranks 20th in the category. With the importance of this game, every possession matters. Points in transition could determine the outcome of the game. The Clippers have allowed the third-fewest fast break points per game in the league. Both Minnesota and Los Angeles have been very good at limiting opponent points off of turnovers. They rank ninth and eleventh, respectively, in that category.