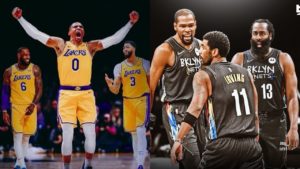 The Lakers are just 2-5 in their last seven games and they will visit the Brooklyn Nets tonight in New York City as a 3-point favorite. Bettors may be wondering how that is possible, but in a battle of stars, the Lakers will likely have more than Brooklyn tonight.

Kevin Durant is out with a knee injury and will miss four to six weeks. With tonight’s game in Brooklyn, Kyrie Irving will be out for the Nets as well due to his vaccination status. The Lakers will have a super-hot LeBron James and Anthony Davis, who has been out since mid-December, is listed as probable tonight for Los Angeles. Add in Russell Westbrook and the Lakers could have three stars to the Nets one.

James has been playing extremely well and the Lakers are wasting it away. L.A. lost to Miami on Sunday despite a 33-point, 11-rebound double-double from James. Russell Westbrook added 24 points, nine rebounds, and nine assists. Since the start of December, James is averaging over 30 points per game.

Scoring is not the problem for the Lakers. They are seventh in the league in scoring averaging 111.3 points per game. The problem is on defense where Los Angeles ranks among the worst in the league. The Lakers give up 112.7 points per game which ranks 27th in the NBA. In their five most recent losses, L.A. allowed 113, 111, 133, 125, and 127 points.

The Lakers have also struggled on the road. They have only won eight of 20 away games this season and they have covered the spread in nine of the 20. Los Angeles has already played Brooklyn once on the road. The Nets played without Durant and Irving. It didn’t seem to be a problem for Brooklyn as James Harden and Patty Mills combined for 70 points in a Nets win. Brooklyn has won two of the last three games against the Lakers and six of the last ten.

Neither team has been great against the number recently. In addition to being 2-5 straight up, the Lakers are also 2-5 ATS in their last seven games. Brooklyn is 4-10 ATS in its last 14 games overall. In its last eight home games, the Nets are 1-7 ATS.

The last time the Nets and Lakers played, it was an offensive explosion with a final score of 122-115. While that game went Over the total, the Under has cashed in six of the last ten meetings with an average total of 220.1. The Under is also 12-3 in the last 15 Nets-Lakers games played in Brooklyn.

Brooklyn is in a rare position. The Nets have been an underdog just nine times this season. In those games, the Nets are 6-3 straight up. If Davis plays, keep in mind that the Lakers are just 13-14 with him in the lineup.