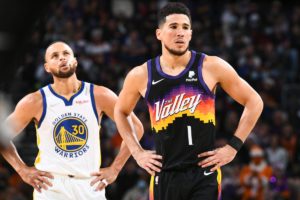 The Golden State Warriors, the defending NBA champions, are 0-7 on the road this year. Tonight, Golden State will be in Phoenix to try to level the score with the host Suns after suffering one of those road losses back on October 25 in Phoenix.

In a tense game that night, Phoenix crushed the Warriors 134-105 while Golden State’s Klay Thompson was ejected for the first time in his professional career. After Monday night’s 132-95 thrashing of the visiting San Antonio Spurs, the Warriors now have a very mediocre 6-8 record. The Warriors need a huge win to get them moving in the right direction.

Jordan Poole started the game against the Spurs since Thompson took a scheduled night off. Poole finished with a season-high 36 points on 13-of-20 shooting. Poole had three steals and made five 3-pointers in the Warriors’ victory. Poole has started just three of the 14 games this season but is averaging 17.1 points per game. His play on Monday night earned him his second 30-point performance of this season.

Warriors star Stephen Curry should be well-rested after playing a season-low 27 minutes against San Antonio.  Curry scored 16 points, his season low, and his average for the season fell to 31.5 points per game. Curry has scored more than 30 points nine times this season. His two highest totals being 47 and 40. In the loss to the Suns last month, Curry scored 21 points.

Since starting the season 6-1, Phoenix has dropped two straight games and four of its last six. The Suns’ 113-112 loss to the Miami Heat on Monday marked the end of a 1-3 road trip. Phoenix blew a fourth-quarter 13-point lead against the Heat. Suns head coach Monty Williams was upset with the outcome and irritated by the gap in free-throw shooting – the Heat made 25 free throws while Phoenix attempted just four.

Devin Booker scored 25 points against Miami. In 10 of the Suns’ 13 games, he has scored at least 20 points. In the victory over the Warriors last month, Booker tallied 34 points and seven assists.

Chris Paul is questionable and could miss his fourth straight game due to right heel pain. In Paul’s first two absences, Cameron Payne put on back-to-back outstanding performances, averaging 22.5 points and 6.0 assists. However, he only made 4-of-17 shots against the Heat and ended up with just nine points. With Landry Shamet out due to a concussion, Duane Washington Jr. delivered punch from the bench with 21 points in 19 minutes.

At home, the Suns are 6-1. Golden State has yet to win a road game this season. The Warriors are also 1-6 ATS in their seven road games.