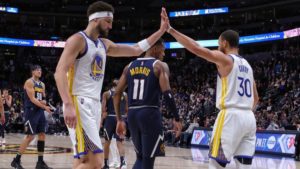 The Denver Nuggets find themselves in a 0-2 hole and are in desperate need of a win at home tonight in Game 3 of their series with Golden State. The Warriors have barely broken a sweat so far in the series-winning both games by at least 16 points. If the Nuggets cannot salvage a win tonight, this series may be over very quickly.

Stephen Curry has been outstanding coming off the bench to help the Warriors’ cause. In Game 2, Curry scored 34 points despite playing just 23 minutes. He shot 12-of-17, including 5-of-10 from three-point range, from the floor. As a team, Golden State shot 54.8 percent from the field and 42.5 percent (17-of-40) from long range.

For Denver, it’s been all Nikola Jokic. That’s the problem. The reigning NBA MVP can’t do it all himself. Jokic scored 26 points and had 11 rebounds in Game 2, but no other Denver player scored more than 12 points. Golden State’s Draymond Green helped to limit Jokic to just 9-of-20 shooting, including 0-for-4 from three-point range.

The other issue is Denver’s defense. The Nuggets have allowed the Warriors to score at least 123 points in both games thus far. They also allowed Golden State to shoot at least 53 percent from the field. If that continues as well as Jokic having to do it all on offense himself, this series won’t last long. Over their last ten games, Denver has allowed an average of 120.8 points per game.

It should come as no surprise then that the Nuggets have only won twice in their last seven games. They are just 1-4 ATS in their last five and six of their last eight games have gone Over the total. Also noteworthy is the Nuggets’ home ATS record – 1-5 in the last six games at Ball Arena. For the season, Denver is just 37-47 ATS with a 15-26 ATS record at home.

Both games in the series so far have gone Over the posted total. The Warriors have seen the total go Over in four of their last five games and 10 of their last 15 when playing on the road. As mentioned, six of the last eight Nuggets games have gone Over. Going back 15 games, 11 of them have resulted in the Over and the Nuggets season O/U record is now 48-35-1. Tonight’s total is a tad higher – 224 – than Games 1 and 2 which reflects the Warriors’ ability to score and the Nuggets’ inability to defend.