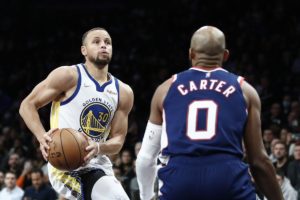 The Brooklyn Nets have shown during their current six-game winning streak that they can win close games. In their last two games, the Nets had slow starts before displaying excellent execution in the fourth quarter. Against the struggling Golden State Warriors tonight, Brooklyn is hoping to get off to a fast start.

Brooklyn has won six in a row by an average margin of 5.2 points. Its largest margin of victory came in a 112-100 road victory over the Washington Wizards on December 12. The Nets are coming home following back-to-back three-point victories in Toronto and Detroit that featured comebacks from double-digit deficits.

The Nets faced an 18-point deficit late in the second quarter and were down by 10 at halftime in Friday’s 119-116 win over the Raptors. Kyrie Irving’s three-pointer at the buzzer gave Brooklyn the victory after they shot 70 percent in the fourth quarter. The following night in Detroit, the Nets overcame a first-half deficit of 19 points to defeat the Pistons. Brooklyn outscored Detroit 70-50 in the second half while shooting nearly 60 percent.

Both comeback victories were achieved thanks to outstanding performances from Kevin Durant and Kyrie Irving. Durant scored 26 of his 43 points on Sunday in the third quarter before Irving added 14 of his 38 points in the fourth. On Friday, Irving scored 15 of his 32 points in the last frame.

Golden State will play its fourth game without Stephen Curry who is out indefinitely with a shoulder injury. He left last week’s 125-119 loss to the Indiana Pacers due to a left shoulder subluxation. After splitting games with the Philadelphia 76ers and Toronto Raptors, the Warriors lost last night to the New York Knicks, 132-94.

The embarrassing loss to the Knicks dropped Golden State to a league-worst 3-15 on the road. The Warriors suffered their sixth loss in the previous eight contests. It was the fourth time this season that Golden State allowed at least 130 points.

In the three games since Curry’s injury, Jordan Poole has averaged 32.7 points. Due to load management, Klay Thompson will miss tonight’s game, which is the second half of a back-to-back. Andrew Wiggins will miss his ninth straight game due to a groin injury leaving Poole as Golden State’s top option.

In their last 13 meetings with Brooklyn, Golden State is 10-3. The Warriors are 2-8 ATS in their last 10 games against the Nets. The Over had hit in five straight Warriors games until last night. The Over is 5-1 in Brooklyn’s last six games. In the series against Golden State, the Under is 5-1 in the last six games. The Under is also 5-1 in the last six Warriors-Nets games in Brooklyn.