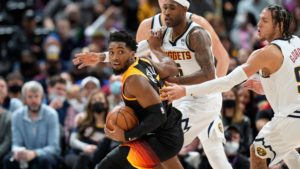 When the Nuggets and Jazz last played in mid-January, Donovan Mitchell scored 31 points for Utah in a 125-102 victory. Tonight’s matchup will look nothing like that game in January. Mitchell, who has been dealing with a concussion, has been ruled out of tonight’s game. Rudy Gobert, who is averaging 16.0 points and 15.1 rebounds per game, is also out for tonight with a calf issue that has been keeping him out of the Jazz lineup recently. Joe Ingles tore an ACL and is out for the rest of the season and key reserve Danuel House Jr. is out indefinitely.

Utah (30-21), which is fourth in the Western Conference, will be playing shorthanded tonight. The Jazz are 10-1 against division opponents this season. That record could be in jeopardy tonight. Denver has been missing Jamal Murray all season as he recovers from a knee injury. Michael Porter Jr. was lost for the season earlier in the 2021-22 campaign.

The Nuggets (28-22) are sixth in the Western Conference standings and have been playing well as of late. They can thank reigning NBA MVP Nikola Jokic for that. Denver had won five straight before a 130-115 loss to Minnesota just last night. Jokic had 21 points, 16 rebounds, and eight assists in the loss and he didn’t get much help from his teammates. He will need support tonight if the Nuggets are going to pull the upset on the road.

Utah has the No. 2 scoring offense in the NBA, averaging 113.5 points per game. Playing shorthanded, the Jazz haven’t come close to hitting their scoring average since Jan. 16. Ironically, that was the game where the Jazz beat Denver 125-102. Other than back-to-back games in which Utah scored 111 points, the Jazz have been held below their scoring average eight games in a row. Without Mitchell and Gobert in the lineup, don’t expect it to happen tonight either.

Denver is 3-6 ATS in its last nine games and is 21-29 ATS for the season. On the road, the Nuggets are 12-16 ATS and Denver is 1-5 straight up and 1-5 ATS in their last six games against Utah. This will be the fourth meeting of this season. Utah has won all three games thus far and has covered the spread in all three as well.

The total has gone Over in nine of Denver’s last 11 games. The Over has been the recent trend in the Nuggets-Jazz series too. The Over has cashed in four of the last five meetings between the two teams.