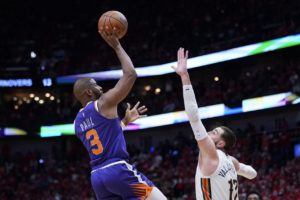 If there’s any question about which team is favored to win the NBA title, they were answered in Game 1 of this Western Conference semifinal series. Phoenix led from the first bucket scored until the end of the game as the Suns beat Dallas 121-114. Deandre Ayton scored 24 points and Devin Booker added we as the Suns shot 50.5 percent from the floor and added to their growing win streak over Dallas.

With the win, Phoenix has now beaten the Mavericks in 10 straight games. The Suns are looking to make it 11 straight tonight at the Footprint Center where the Suns are 35-10 SU this season. Game 1 marked the 30th straight sellout at the Footprint Center and it definitely helped Phoenix. The Suns, as mentioned led the entire game and improved their record to 51-0 this season when leading after three quarters. They are 4-0 this season when leading after the third quarter.

The Mavs got 45 points from its star Luka Doncic. They may have relied too heavily on him. He hit 15-of-30 shots from the floor, had 12 rebounds, and dished out eight assists for Dallas. Teammate Maxi Kleber added 19 hitting 5-of-6 from behind the arc. He and Doncic were pretty much the Dallas offense in Game 1. If the Mavs don’t get some help from the rest of their lineup, they are probably checking out of this series sooner rather than later.

The mighty Dallas defense could not contain the Suns. All five Phoenix starters scored in double figures. That helped push the game total Over. It was the second straight Over for Phoenix and the fifth in the last six Suns games. Phoenix is now 4-1 SU in its last five games and 7-2 SU in its last nine games at home. The Suns are 6-0 SU in their last six games against Dallas at home at the Footprint Center.

After not covering in Game 1, Dallas is now 5-1 ATS in its last six games. The Mavs have not been good against the number when playing Phoenix. Over the last 20 head-to-head matchups with the Suns, Dallas is just 4-16 ATS.

The Mavericks have the best defense in the NBA. The Suns made the Mavs look bad scoring more than 120 points against Dallas. That is something that has only happened three times in the Mavs’ last 18 games. Dallas allows a league-low 104.5 points per game. Because of its defense, Dallas trended Under all season with a 34-53-2 O/U record. Six of the Mavericks’ last eight games on the road have gone Under the total.

Game 1 was the first Mavs-Suns game with a combined score of over 217 points. In the six games prior to Game 1, Dallas and Phoenix combined to score an average of 211.7 points a game. Because of Game 1, tonight’s total has moved up to 216.