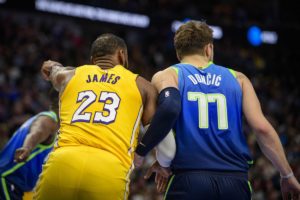 The Los Angeles Lakers will try to regroup Thursday against another conference power in the Dallas Mavericks after their recent winning streak was halted by the top team in the Western Conference. The Denver Nuggets defeated the Lakers 122-109 on Monday, snapping LA’s season-best five-game winning streak. LeBron James sat out the game with a sore left ankle.

As if not having James wasn’t enough, Los Angeles was also without Patrick Beverley (hip) for the second half, Lonnie Walker IV (knee), Austin Reaves (hamstring), and Troy Brown Jr. (quad). Don’t forget, Anthony Davis has been sidelined since December 18 with a stress fracture in his foot.

That has been the Lakers’ 2022-23 season. Head coach Darvin Ham dealt with a brutally slow start to the season as well as a huge number of injuries. It seems as though the injuries have increased since Davis’ injury in mid-December. That is when James stepped up to challenge his teammates. They responded with a five-game winning streak. One of those games came without James in the lineup. The Lakers were unable to do the same on Monday against Denver.

James is listed as probable for tonight. That gives the Lakers some hope against the No. 5 team in the Western Conference standings. Dallas is 23-19 overall after having lost three of its last four games. Dallas had won seven in a row prior to its last four games. Losses to Oklahoma City and the LA Clippers on Tuesday leave the Mavs 0-2 in their current five–game road trip. The trip concludes with two games at Portland over the weekend.

Mavs star Luka Doncic sat out Sunday’s 120-109 loss to the Thunder to rest his left ankle. When he came back on Tuesday, Dallas lost to the Clippers 113-101 despite his 43 points and 11 rebounds. Doncic had just three made field goals in the first half of that game before taking over and scoring 31 points after the break. With less than three minutes to play, Doncic hit consecutive three-pointers to keep the game close before LA pulled away.

Dallas, like the Lakers, is dealing with some injuries. Dwight Powell left Tuesday’s game in the first half and did not come back. Maxi Kleber (hamstring), Dorian Finney-Smith (adductor), and Josh Green (elbow) are all ruled out for tonight.

The Lakers are 5-1 SU and 5-0-1 ATS in their last six games. Los Angeles is 4-1 SU in its last five games at home. Both teams trend Over. The total has gone Over in 12 of the Lakers last 18 games and their season O/U record is 24-17. The Over is 6-3 in Dallas’ last nine games and the Mavs O/U record for the season is 24-18. Both teams are in the top ten in Over percentage this season.