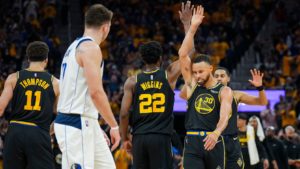 Golden State has a second chance to eliminate Dallas and move on to the NBA Finals with a victory at home tonight. The Mavericks fought off elimination with a Game 4 win doing what they had been unable to do in Games 1, 2, and 3 – outshoot the Warriors. Dallas will have to do that once again tonight if they have a chance at another upset.

The Mavs shot 50 percent from the field and 46.5 percent from three-point range. Luka Doncic had 30 points, but for the first time, Doncic had the support of his entire team. Five other Mavericks players scored in double figures and Dallas got 33 points from its bench. The 119 points scored by Dallas was the most in the series and their third-highest playoff total this season.

Golden State has been in this situation before. In each of the previous two playoff rounds, the Warriors had the chance to eliminate their opponent on the road. They were up 3-0 at Denver and 3-1 at Memphis. They lost both of those road games but came back to end the series in the next game at home.

The Warriors have been ahead 3-0 in 11 playoff series since 2015. In all the Game 4s in those 11 series, Golden State is just 6-5 SU. However, the Warriors won all five Game 5s after losing Game 4. The Warriors are also playing well at home where they have won their last 10 straight games and 16 of their last 20. In 49 games at the Chase Center this year, Golden State is 39-10.

If Dallas is going to find a way to pull the upset, they are going to have to find a way to slow down Golden State. The Warriors have scored at least 109 points in each game of this series. That’s about six points more than the Dallas defense was allowing during the regular season. Golden State is also the highest-scoring team in the postseason.

That means Dallas is going to have to play like it did in Game 4. Doncic needs scoring support from his teammates. In the Mavs three losses in this series, Doncic is averaging 37 points. In Dallas’ lone win, Doncic scored 30. Golden State simply needs to be Golden State. The Warriors shot 48 percent in Game 4, but Dallas shot 50 percent. Golden State has shot particularly well at home. In Games 1 and 2 of this series, the Warriors shot 56.1 percent in each game.

With the Game 4 win, Dallas is 10-5 SU in its last 15 games against Golden State. Don’t forget the Mavs’ 3-1 record over the Warriors in the regular season. Dallas has only covered once in its last five games on the road.

The total is an even 2-2 in the series so far. Game 4 looked like it was going Under, but Golden State put up 40 points in the fourth quarter after the game was out of reach. Dallas has been trending Under with six of its last nine games resulting in the Under. In the Mavs-Warriors series, 14 of the last 20 games have gone Over the total.