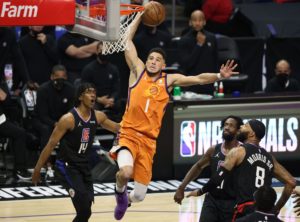 The Clippers somehow manage to stay afloat despite all their problems this season. It started with Kawhi Leonard’s knee injury that will likely keep him out the entire regular season. Then, Paul George suffered an elbow injury. LA went out and acquired Norman Powell who averaged 21 points in his three appearances with the Clippers. Then, Powell breaks a bone in his foot. Still, the Clippers have won their last two games and face the NBA’s best – Phoenix – tonight.

Los Angeles just played last night beating Golden State as a six-point underdog. The Clippers won by 15 as all five starters scored in double figures. Terance Mann led the way with 25 points. Playing on the second leg of a back-to-back is difficult enough. The Clippers have to do it against the best team in the NBA.

The Suns have won five in a row and nine of their last ten. Phoenix lost to Atlanta ten days ago. Since, they have won those five games in a row by an average of 14.8 points. On Sunday, they beat Orlando by 27 and none of the Suns’ starters played more than 30 minutes. Phoenix will be well-rested heading into tonight.

The Clippers have not done well against Phoenix this season either. Los Angeles has faced the Suns twice this season. They lost both games, one by 16 points and the other by 17. In the last nine games in this series, the Suns have won six times.

Phoenix has the league’s best adjusted net rating and second-best adjusted offensive rating. The Suns have cranked up the offense recently. They are averaging 123.2 points per 100 possessions. Phoenix scored 132 in the win over Orlando and 131 in a win over Milwaukee in the game prior. The Suns are averaging 126 points over their last four games.

With a double-digit scoring margin in their five-game win streak, the Suns are 4-1 ATS giving Phoenix a 32-24 ATS mark for the season. In their last 20 games played in the month of February, the Suns are 16-4 ATS. The Clippers are just 2-5 ATS in their last seven games. Both of those covers came in the Clips last two games when LA was the underdog.

The Suns’ defense has faltered a little recently. They are still seventh in the NBA in points allowed (105.4) but they have allowed an average of 111 over their last four games. That is part of the reason why tonight’s total is set at 223. Both teams have seen the total go Over in four of their last five games. But, in the last eight games between the two teams, only once has a total gone above 223. The last ten meetings have produced an average total of just 208.1. The Clippers’ defense has failed them recently too. In their last five games, LA has given up an average of 117 points a game.