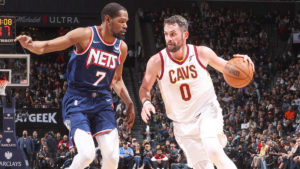 Brooklyn wrapped up the No. 7 seed in the play-in tournament with a 134-126 win over Indiana on Sunday. The Nets will have home-court advantage against Cleveland, a team the Nets have beaten three times already this season. One of those victories was just last week, a 118-107 Brooklyn win over the Cavs. Two of the three wins over Cleveland have come by at least ten points too. Tonight, the Cavs will once again play without Jarrett Allen and that makes beating Brooklyn that much more difficult.

It wasn’t all that long ago that Cleveland was a top-4 team in the Eastern Conference. The Cavs hung around the top-4 for a stretch this season. Then, the injuries piled up. Evan Mobley was out. Allen has been out for some time. The Cavs have been playing without Collin Sexton for most of the season. Those injuries caught up with Cleveland. Since Feb. 28, the Cavs have won eight of 22 games. That is why they slipped into the play-in tournament. On top of that, they lost a chance at hosting this game.

Without Allen, the Cavs have no inside presence and that could present a problem against the likes of Kevin Durant and Kyrie Irving. The Nets pair has been on fire recently. Durant and Irving have each had 30-plus point games in three of their last five and over the last ten games, they have averaged a combined 58.2 points per game. In the win over Indiana on Sunday, Irving had 35 points and Durant recorded a triple-double with 20 points, 16 assists, and 10 rebounds.

The one thing that Cleveland can lean on is its defense. They have been one of the top units in the NBA all season long. The Cavs rank fifth in points allowed per game (105.7 ppg). If they can find a way to slow down either Durant or Irving – stopping them both just isn’t going to happen – the Cavs may be able to keep this one close.

Cleveland is 3-8 SU in its last 11 games and has covered the spread just three times in its last twelve. The Cavs are also just 1-6 ATS in their last seven road games. They haven’t had much success against Brooklyn recently either. Cleveland is 1-4 SU in the last five against the Nets.

Brooklyn is one of the worst teams in the league against the number with a 32-47-3 ATS record for the season. For the season, the Nets covered just nine of 41 home games. They are 2-6 ATS in their last eight games and 1-5 ATS in their last six games at home. Brooklyn did cover in the win over Cleveland on April 8. The Nets were an 8.5-point favorite and won 118-107.

The total has gone Over in 12 of Cleveland’s last 18 games. Brooklyn has seen the Under hit in four of its last five games, but in the Nets-Cavs series, the Over is 5-2 in the last seven games.