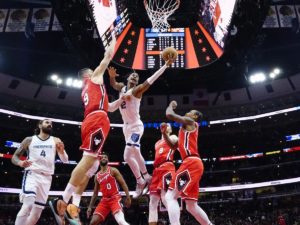 It’s a battle for the top spot in the Eastern Conference as Chicago (39-22) travels to Miami (40-21) tonight. Both teams have been playing well recently. The Bulls are 6-1 in their last seven games and the Heat are 8-1 in their last nine. The two teams have played twice so far this season and Miami has won both games. The Heat are hard to beat at home in FTX Arena where they are 20-7 this season.

Miami played back-to-back on Friday and Saturday night, winning both games. They beat the Knicks by 15 and then turned around and held off San Antonio 133-129 at home to win their first two games after the All-Star break. Now, they’ll take on a Chicago team that lost for the first time in seven games on Saturday. The Bulls lost at home 116-110 to Memphis as Ja Morant had a big night for the Grizzlies.

The Bulls are still one of the NBA’s best and DeMar DeRozan is a big reason why. He is a legitimate MVP candidate now averaging 28.3 points per game. With 31 points in the loss to Memphis, DeRozan has now scored at least 30 points in 10 straight games. Chicago also has Zach LaVine back in the lineup, which is a huge boost. LaVine averages 24.6 points per game.

With DeRozan and LaVine, the Bulls are one of the top-scoring teams in the NBA. They are eighth in scoring offense averaging 112.6 and in their recent six-game winning streak Chicago scored less than their average just once. In four of the six wins, the Bulls went for 120 or more.

This is a huge game and has playoff implications. The winner has the inside track at the East’s top seed in the postseason. Games like this tend to be defensive-minded and physical. Miami is one of the NBA’s better defensive teams. They are fifth in points allowed per game (104.8). In their last eight wins, Miami has held opponents to 100 or fewer points five times.