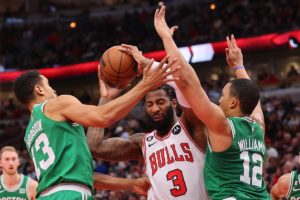 The Boston Celtics have won back-to-back games in Dallas and San Antonio, and they are optimistic as they play their next two games at home. Boston concludes a four-game season series with the Chicago Bulls tonight. The Celtics will be looking to even up the season series at 2-2 and improve upon their NBA-best 28-12 record.

Boston defeated San Antonio 121-116 on Saturday to earn its sixth victory in eight games. Jayson Tatum and Jaylen Brown scored a combined 63 points in that victory. The Celtics had their biggest road victory of the season two nights ago when they defeated Dallas 124-95.

Boston lost an 11-point lead against the Spurs before scoring the game’s final five points. Tatum scored a game-high 34 points including the winning jumper with 33.7 seconds remaining. Malcolm Brogdon came off the bench and contributed 23 points for Boston. Center Robert Williams III finished with 10 points, 11 rebounds, three assists, and four blocked shots. Williams matched his season high of 22 minutes played against the Spurs.

The Bulls, who are two games under .500 at 19-21, travel to Boston having won three straight games for just the second time this year. Chicago defeated Utah at home on Saturday by a score of 126-118. Zach LaVine led the Bulls with 36 points and DeMar DeRozan added 35. It was the tenth straight game that one of the two Bulls led the team in scoring.

In his last two games, LaVine has made 17 3-pointers, including a season-high 11 during a 41-point performance on Friday in Philadelphia’s 126-112 victory. Bulls head coach Billy Donovan would like DeRozan to shoot between 10 to 15 threes each night. Between DeRozan and LaVine, the Bulls have a strong balance of perimeter shooting and the ability to take the ball to the rim.

In each of the three head-to-head contests between the Celtics and Bulls this season, Tatum and DeRozan have led their respective teams in scoring. The home team has won every game, including two in Chicago and one in Boston. On November 4, DeRozan scored a season-high 46 points in a 123-119 loss to Boston. On Nov. 21, the Bulls answered with a 121-107 home victory, ending Boston’s nine-game winning streak.