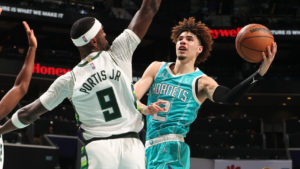 There is no doubt the Charlotte Hornets can score. Tonight, they will take the NBA’s top-scoring offense to Milwaukee to face the Bucks, who have cooled off recently with four losses in their last five games. Milwaukee lost its first game after the All-Star break, dropping a 126-123 decision to Brooklyn. It was the fifth game in a row that the Bucks allowed at least 119 points to their opponent. If they continue to play defense like that, Charlotte is going to have a field day.

The Hornets have also had great success against the Bucks this season. In three games thus far, Charlotte is 2-1 against Milwaukee. Both Hornets’ wins came at home and Charlotte has covered the spread in all three. Tonight’s game marks the largest spread of the four games this season. The double-digit spread is likely the result of the Hornets having played last night. Charlotte lost to Detroit 127-126 in overtime. It’s hard enough playing back-to-back in the NBA. Going to overtime last night makes it that much more difficult.

The Bucks got an extra day of rest after giving up 38 points to Kyrie Irving in the loss to the Nets. Milwaukee’s defense ranks 16th in the NBA in points allowed giving up 110.1 per game. Since allowing 98 to Washington on Feb. 1, the Bucks have given up less than their average just once and that was on Feb. 5. Milwaukee is 5-4 in February thanks to an offense that has been pouring on the points. In their nine games this month, the Bucks have averaged 122 a game and have gone over 130 three times.

The Hornets will have their hands full with two-time former MVP Giannis Antetokounmpo, Khris Middleton, and Jrue Holiday. Charlotte ranks 28th in the league in points allowed per game (114.4). The Hornets have won just two of their last ten games. In four of their eight losses in that span, the Hornets gave up over 120 points. In their last ten games, Charlotte has covered just twice and has a record of 2-6-2 ATS.

Tonight’s total is a big one at 241. Both of these teams can score. The Bucks are fifth in the league in scoring (113.3 ppg) and their recent lack of defense has affected their game totals. Each of the last eight Bucks games has gone Over the posted total. Seven of Milwaukee’s last eight home games have also gone Over. Charlotte typically faces large totals. Eight of their last 12 games have gone Under, but four of their last five road games have gone Over.