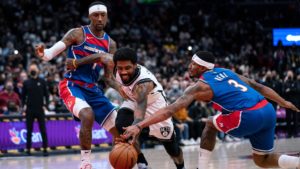 It was just January 21st whenever the Brooklyn Nets were in command of the Eastern Conference. On that day, they were 29-16 and owned the top spot in the conference. Since then, the Nets have lost every single game they have played. That’s nine in a row, which has dropped them all the way to eighth in the East. If there is a team suffering nearly as much as Brooklyn, it’s Washington. That gives the Nets a chance to end their losing streak.

The Wizards have lost nine of their last 11 games and just got more bad news. They will be without leading scorer Bradley Beal for the rest of the season. Washington is 1-3 so far without Beal and they have dropped out of the top 10 in the East. Their playoff hopes are likely over now that Beal will miss the rest of the season.

The Nets’ problems are due to injury as well. Kevin Durant remains out indefinitely with a knee injury. James Harden has been dealing with a hamstring problem and is out for tonight. Neither Durant nor Harden played on Tuesday night when Brooklyn lost to Boston 126-91 at home. The game was in Brooklyn so Kyrie Irving had to sit out (vaccine mandate) as well. Without any of their Big Three, Brooklyn lost badly.

Irving has only played 12 games this season, but he should play tonight with the game in Washington. The Wizards are just 13-14 at home and 12-15 ATS in home games this season. Overall, Washington has been a team to fade as their ATS record is 20-32-1. The Nets aren’t much better as both Brooklyn and Washington are in the bottom three in cover percentage this season. The Nets are 19-34-1 ATS this season. Brooklyn has failed to cover in five straight games and is 1-8 ATS in their current nine-game losing streak. It’s fitting that the Wizards are also 1-8 ATS in their last nine games.

Brooklyn was a top 10 offense but has dropped to 11th averaging 110.9 points per game. Since Jan. 25, the Nets have hit at least their average just twice. Their scoring has dropped off significantly over their last four games with totals of 101, 102, 104, and 91 points. That’s what happens when you lose the 75 points per game produced by Durant, Harden, and Irving.

Washington is in pretty much the same boat as they have scored over 100 points just once in their last five games. The Wizards are averaging 102 points in their last ten games. Defensively, both teams are struggling as Washington allows 110 points a game and Brooklyn a whopping 118. Despite the poor defense, the total has gone Under in four of the Wizards’ last five games. Each of the Nets’ last two games have gone Over, but that’s primarily due to Brooklyn allowing 124 and 126 points by their opponents.