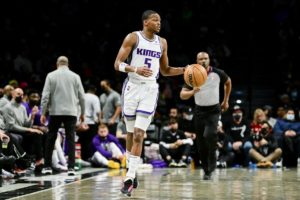 The Nets and Kings have each taken off their Halloween masks and turned back into teams that are playoff contenders. The Nets finish a three-game California trip tonight at Sacramento looking to rebound from a loss to the Lakers on Sunday.

Before their wins on Halloween, the Nets were 1-5 and the Kings were 1-4. Wins on Oct. 31 sent both teams upward in their respective conference standings. Brooklyn won five of their eight games while Sacramento won five of seven.

The Los Angeles Lakers defeated Brooklyn 116-103 as the Nets were unable to contain the Lakers’ dynamic big man Anthony Davis. He dominated and finished with 37 points and 18 rebounds. The loss ended the Nets’ two-game winning streak.

Domantas Sabonis, who plays for the Kings, is a player with similar skills to Davis. On Friday, he and the Kings beat Davis and the Lakers as Sabonis had a double-double of 21 points and 10 rebounds. On Monday night, Sabonis had a monster game with 26 points and 22 rebounds in a 122-115 win over Golden State.

In Sacramento’s 1-4 start, Sabonis, who was acquired by the Kings from the Indiana Pacers in February, averaged 14.4 points and 9.2 rebounds. Since the slow start, his recent stats of 20.4 points and 12.9 rebounds have made a significant difference in Sacramento’s play.

Before the February trade, Sabonis played in the Eastern Conference his whole career, so he has a lot of experience playing the Nets. In three of his last six games against Brooklyn, Sabonis has recorded triple-doubles.  In one of those games, Brooklyn’s Kevin Durant scored 39 points.

Durant, a 12-year veteran of the Western Conference before joining Brooklyn in 2020, had more than his fair share of success against the Kings. As a member of the Nets, he has never played the Kings. Durant averaged 30.7 points, shot 54% from the field, and had two double-doubles in his last seven games versus Sacramento, all victories.

In each of this season’s 14 Nets games, Durant has scored at least 26 points. He scored 27 points in the 110-95 victory over the Los Angeles Clippers on Saturday to start the trip, and then added 31 in the Lakers defeat on Sunday. His streak of 26-point games to start the season is the longest since Michael Jordan had 16 to start the 1989 campaign.

The Kings are fifth in the NBA in scoring averaging 116.7 points per game. The Kings scored 120 points or more in each of their last three games. Two of the three went Over the total while the other was a push. The total has gone Under in seven of Brooklyn’s last eight games. Four of the last six games in the series have gone Under.