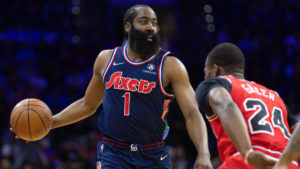 Despite having Kevin Durant back in the lineup, the Brooklyn Nets continue to struggle. They have just one win in their last five games and now they have to travel to Philadelphia to take on the streaking 76ers. Philly has won six of its last eight games and the Sixers are coming off a rather impressive 121-106 win over Chicago on Monday night. The 76ers are well-rested and looking forward to James Harden’s first game against his former team.

Harden is averaging 24.6 points and 12.4 assists per game since his trade from Brooklyn to Philadelphia. In the five games the Sixers have played with Harden, they are a perfect 5-0. With Harden running the show, MVP candidate Joel Embiid is even better. In the win over Chicago on Monday, Embiid scored 43 points and grabbed 14 rebounds for the Sixers. The Philly 7-footer continues to average nearly 30 points per game even with Harden in the lineup.

Harden has injected some life into the 76ers offense. Philadelphia averages 108.5 points per game for the season, but in the five games with Harden in the lineup, the Sixers are averaging 125.4. In their past six games, Philadelphia scored at least 121 points in all but one game. The Sixers lost to Miami 99-82 in a game that Harden sat out.

With tonight’s game in Philadelphia, Kyrie Irving will suit up for the Nets. That’s a bonus as Irving has been on fire since the All-Star break. He has only played in three games, but he is averaging 35.7 points in those three games. Getting Durant back hasn’t made much difference and he had a rough night on Tuesday scoring just 14 points against Charlotte. Irving, on the other hand, went off for 50 as the Nets won 132-121 over the Hornets.

That win was Brooklyn’s first in five games. In their last five games, the Nets are just 2-2-1 ATS and they are one of the worst cover teams in the league at 25-38-3 ATS for the season. However, Brooklyn does have a 19-14-2 ATS record when playing on the road. The Nets are also 4-2 ATS in the last six games against Philadelphia.

Both teams have been trending Over. The total has gone Over in 11 of the Nets’ past 14 games. Much of that has to do with their 22nd ranked defense that allows 112 points per game. With Harden in the lineup, the Sixers’ offense has been pouring on the points. The Over has now cashed in six of the last eight Sixers games. In the head-to-head series, the total has gone Over in six of the last nine meetings.