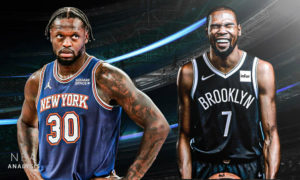 Brooklyn has a spot in the play-in tournament locked up, but the Nets would like to avoid being the ninth or tenth place team. They head to rival New York tonight as a 5.5-point favorite. That could be a good thing or a bad thing. The Nets haven’t covered a spread in their last five games. They were favored in each. The problem for Brooklyn isn’t the offense. The Nets have scored 115 points or more in each of their past four games and rank ninth in scoring offense for the season. No, the issue is the Nets defense.

Prior to beating Houston 118-105 last night, Brooklyn gave up 120 or more points in three straight games. The Nets rank in the bottom 10 in both points allowed per game and defensive efficiency. While Kevin Durant and Kyrie Irving form one of the most potent scoring duos in the NBA, the Brooklyn defense struggles at the other end. That gives Nets opponents a chance to keep things close.

The Nets have beaten the Knicks in six straight games. Brooklyn failed to cover in four of the five games in which they were favored over New York. The last three games in the series, all played this season, have been decided by an average of less than four points. The last time the teams met was March 13 and Brooklyn won 110-107. The Nets were also a 5.5-point favorite in that game and failed to cover.

The Knicks are one of the poorer offensive teams in the NBA. They rank 27th in points scored per game (106.5) and 22nd in offensive efficiency. Their lineup has suffered a number of injuries and leading scorer Julius Randle has been out indefinitely. With the Knicks eliminated from the playoffs, they lack motivation as well as playmakers.

Despite their lack of playmakers, the Knicks have actually won five of their last seven games. They are 4-3 ATS in those games, but in their last 12 home games, the Knicks are just 2-10 ATS. For the season, New York is 15-24 ATS in home games.

Even though the Nets give up a ton of points, their recent game totals have adjusted to account for that. As a result, five of the last six Brooklyn games have gone Under the total. The Knicks have the sixth-best defense (in terms of points allowed per game) in the NBA and it’s no surprise that the total has gone Under in four of their last five games.