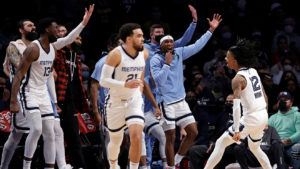 Rather quietly, the Brooklyn Nets have become one of the hottest teams in the NBA right now winning six of their last seven games. They are coming off a huge win over Utah on Monday night yet still find themselves in eighth place in the Eastern Conference. Now, they will travel to Memphis where the Grizzlies have the second-best record in the Western Conference. There’s just one problem for Memphis tonight. They will not have their leading scorer Ja Morant.

Morant, who averages 27.6 points per game, will miss tonight’s game with knee soreness. He has missed two of the Grizzlies’ last three games. Memphis has actually played very well without Morant this year. He has missed 16 games and the Grizzlies are 14-2 without him with a net rating of 17.9.

Since the game is on the road, the Nets will have both Kevin Durant and Kyrie Irving in the lineup. Durant has been playing at an MVP level averaging 29.6 points, 7.2 rebounds, and 6.1 assists per game. With Durant playing, Brooklyn is 30-15 SU. The Nets also have a higher power rating in road games because of Irving who averages 27.7 points, 5.3 assists, and 4.7 rebounds per game.

In their current streak of six wins in seven games, the Nets have won those games by an average of 16.3 points. Their only loss came on a last-second shot against Dallas. Brooklyn is 4-2 on the road since the All-Star break and has the second-best net rating (13.4) in road games during that span. The only road losses came in a game against Toronto when neither Durant nor Irving played. The Nets’ other loss was to Boston.

With Durant and Irving in the game, the Nets are outscoring opponents by +18.3 points per 100 possessions and have an offensive rating of 128.7. Without Morant for Memphis, the Nets should thrive but don’t forget this is a team that has also won six of its last seven. Since the All-Star break, the Grizzlies have the sixth-best net rating (7.0).

The Memphis defense ranks 15th in defensive rating against teams with top-10 offenses. Over the past two weeks, the Grizzlies rank 20th in the same category. They have up 120 points to Atlanta in their only loss in the last seven games.

Both teams are trending Over. Four of the last six totals have gone Over for Memphis and the Over has hit in 14 of the Nets’ last 20 games. The total has gone Over in eight of the last 12 games in this series.