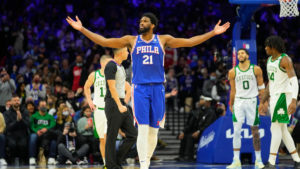 They are one of the hottest teams in the NBA since the calendar flipped to January. Boston has won eight straight and is 16-6 since the New Year began. Tonight, they will face a 76ers team that is enjoying some success of its own. Philadelphia has won three of its last four games and six of its last eight at home. The two teams played in Philly on Jan. 14 and the Sixers walked away with a 111-99 victory. Can they end the Celtics winning streak tonight?

To do so, the Sixers will need another big night from MVP favorite Joel Embiid. The big man scored 40 points and had a triple-double with 14 rebounds and 10 assists as the Sixers beat Cleveland on Saturday. For the month of January, Embiid finished with averages of 34 points and 10.8 rebounds. So far in February, he is still dominating averaging 32.2 points and 13.7 rebounds per game. Boston will have to do something to slow Embiid down.

Offensively, Jayson Tatum has been tearing it up. In Boston’s last ten games, Tatum has averaged 25.3 points and 7.5 rebounds. On Sunday in a 105-95 win over Atlanta, Tatum scored a game-high 38 points and added 10 rebounds for a double-double. Tatum and Jaylen Brown (23.5 ppg) make the Celtics offense go. Boston scores 108.4 points a game which ranks 18th in the league. Since Jan. 1, the Celtics are 27th in pace (96.3).

Philadelphia has actually been very good defensively this season as well. The 76ers rank sixth in the league in points allowed per game (105.2). In their last three wins, the Sixers held their opponents to 98, 87, and 108 points. Philly is also just 21st in the NBA in scoring (107.6) which has led to the Sixers trending Under. For the season, the Sixers O/U record is 22-33-1. Six of their last nine games have seen the total go Under.

It’s no surprise that Boston trends Under as well. Since, the beginning of January, Boston has the NBA’s best defensive rating (100.7), and remember they are 27th in pace. In their last 14 games, the Under is 11-2-1. That includes five of the last six totals going Under.

In the Sixers-Celtics series, the total has gone Under in eight of the last 12 games. The game played on Jan. 14 actually went Over with a total of just 207.5. Boston has covered the spread in three of its last four games but is 0-7 ATS in the last seven games against Philadelphia.