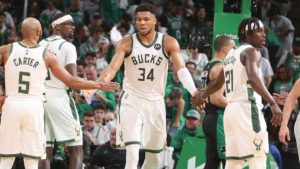 It could all be over tonight. The Milwaukee Bucks hold a 3-2 advantage in their series with Boston. The Bucks will play at home tonight at the Fiserv Forum where they are 30-16 SU this season and 13-3 SU over the past two postseasons. Boston will try and force a deciding Game 7 back in the confines of their home, TD Garden. The Celtics had the chance to take the series lead in Game 5 at the Garden, but they blew a fourth-quarter 14-point lead. Now, they have to beat a Milwaukee team that is tough to beat at home.

That the Bucks are up in the series is a testament to the team for playing without one of its stars – Khris Middleton. He hasn’t played at all in the series and he will remain out for tonight’s game. Middleton has returned to start some on-court work, but he won’t play tonight. Playing in a Game 7 is a possibility, but the Bucks would like to end the series tonight and allow Middleton some more time to get ready for the Eastern Conference finals.

Giannis Antetokounmpo has been nearly unstoppable in the series so far. In Game 5, he had 40 points. Jrue Holiday has stepped up and he had a huge Game 5 scoring 24 points. He also added eight rebounds and eight assists. Holiday made not one but two plays that preserved the Bucks’ win over Boston in Game 5. He recorded a steal and a block – both involving Marcus Smart who ironically was the NBA’s Defensive Player of the Year – in the final minute of play to give Milwaukee the victory and the series lead.

Boston could also be without a starter tonight. Robert Williams III did not play in Game 5 and his defensive presence inside was missed. The Celtics’ defense has given up 101.6 points per game so far in this series. The closer the Celtics keep Milwaukee to that total the better chance they have of evening the series.

Boston has trended Over in its last 20 games. The total has gone Over 13 times in those 20 for the Celtics. The Over has also hit 10 times in the last 14 Bucks-Celtics games.