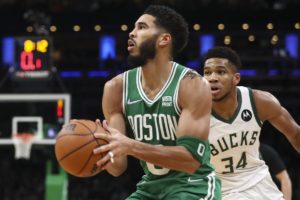 With a win in Game 3, Milwaukee is now favored to advance to the Eastern Conference finals. The Bucks jumped out to a big lead in Game 3 and then held off a furious Boston rally to win 103-101. Giannis Antetokounmpo led the Bucks with 42 points as the Celtics have yet to figure out how to stop him. Milwaukee now holds a 2-1 series lead and the Bucks can make it 3-1 with another victory at home tonight. The Bucks are 30-15 SU at the Fiserv Forum.

Of all the remaining teams in the playoffs, the Bucks have the best Net Rating (+13.8). It’s largely due to the defense, which has been dominant in the postseason. Milwaukee’s defensive rating is 94.4 which is roughly 10 points lower than every other team left in the playoffs. The Bucks have won seven of their last ten games and in those seven victories, they have allowed opponents 101 points or less. In four of the wins, Milwaukee held the opposition to 95 or less.

What Boston needs tonight is better shooting from Jayson Tatum. The Celtics star hit just 4-of-19 shots in Game 3 and scored just 10 points. That can’t happen again. He’s averaging 25.4 points a game during the playoffs and the Celtics need him to produce. Boston will also need to do something to slow down Antetokounmpo. Another 42-point outing can’t happen either if the Celtics are going to even this series.

All three games in the series so far have gone Under the total. That gives Milwaukee, one of the highest-scoring teams in the NBA, eight straight Unders. Boston trends in that direction also with five of their last six game totals going Under. With the low-scoring games so far, tonight’s total opened at 210 but is now set at 212 just as it was in Game 3. The 204 points scored in Game 3 represented the most so far in this series.