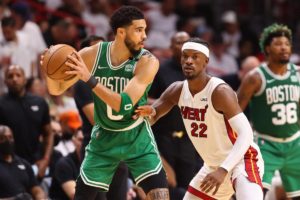 Jimmy Butler and the Miami Heat just missed making it to the NBA Finals last year. With 16.6 seconds left in Game 7 of the Eastern Conference Finals and the Miami Heat trailing the Boston Celtics by two, Butler pulled up for a 3-pointer. As the country watched, his three-point shot clanged against the front rim. When Jaylen Brown snatched the rebound and Marcus Smart sank two free throws, Miami’s season was over in an instant.

Butler and the Heat will try and forget all of that when they host the Celtics on Friday night. Miami also had a difficult opening night of the new season, falling to the visiting Chicago Bulls 116-108. Miami crumbled in the third quarter despite Butler’s 24 points, Tyler Herro’s 23, and Max Strus’ 22 points off the bench. They lost the quarter by a score of 37–27 which ultimately led to the loss. DeMar DeRozan burned the Heat for 37 points and led Chicago to a victory despite the absence of teammates Zach LaVine and Lonzo Ball.

The Heat must get better if they want to upset a Boston team that just defeated Philadelphia by a score of 126-117. Jayson Tatum and Brown each scored 35 points, which came from a combined 27-of-44 field goals made (61.4 percent). The Celtics did not have the look of a team that had just fired its head coach, with just 11 turnovers and shooting 56.1 percent from the field. After leading the Celtics to their first victory under his leadership, interim head coach Joe Mazzulla is eager for more success.

Butler is aware that the Heat’s defense needs to be better if they are to stop Tatum and Brown. Guard Victor Oladipo, who missed Wednesday’s opener against Chicago due to a knee injury, will be out tonight again. That is another element that the Heat must overcome.

Although Miami is just 1-4 SU and ATS in its past five games dating back to last season, the Heat have won 10 of the last 14 home games. Boston was quite successful against the spread late in the previous season. In their previous 16 away games, the Celtics have an impressive 13-3 ATS record. In their previous six games versus the Heat, they are also 4-2 SU and ATS.

Last season, Boston and Miami were two of the NBA’s top defensive teams. The Celtics were the best defensive team in the league. That is one of the reasons why four of their last six games have gone Under the total. In their season opener with the Sixers, Boston was firing up three-pointers and the total went way Over.

In last year’s playoff series between the two teams, Boston and Miami saw some very low totals and as a result the Over went 4-3 in the seven games. The first three games in the series saw totals of 203, 206, and 207.5. All three games went Over.