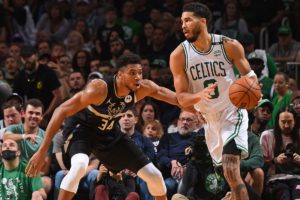 When Boston travels to Cleveland tonight to face a Cavaliers team hoping to maintain its early-season run, they will be seeking some payback. The two teams met just six days ago and Cleveland overcame a seven-point deficit to hand the Celtics their first home loss of the season.

The Cavaliers have won their last five games after suffering a loss to start the season. Following losses to the Chicago Bulls and Cleveland, the Celtics trounced Washington at home on Sunday evening and haven’t played since.

It appears like Donovan Mitchell enjoys his new team. In his first six games with the Cavaliers, Mitchel is averaging 32.2 points per game. Forward Dean Wade has contributed significantly to Cleveland. Wade had 22 points on Sunday as the Cavaliers defeated the New York Knicks 121-108 after coming back from a nine-point deficit at home in the fourth quarter.

Wade, a fourth-year product of Kansas State, made his third consecutive start for the Cavs. He went 8-of-11 from the field overall and 6-of-8 from beyond the 3-point arc. He also had four rebounds and three assists.

The Celtics pounded Washington 112-94 after dominating the opening frame and taking an early 19-point lead. Malcolm Brogdon led an outstanding bench effort and scored 23 points in the win, while Jaylen Brown finished with 24 points. Boston maintained their lead and pulled away in the fourth quarter thanks to the bench, which scored 48 points overall. The Celtics’ bench shot 55.6 percent overall and made 90 percent of its free throw attempts.

The Celtics’ top scorer is Jayson Tatum who averages 30.8 points per game. He and Brown enjoy having Brogdon around. The former Rookie of the Year was acquired from Indiana in the offseason and now ranks third on the team in scoring with an average of 13.3 points per contest.

In its previous six games, Boston is 4-2 SU. The Celtics are 3-6 ATS in their previous nine games. Boston has enjoyed success against Cleveland with a record of 11-4 SU in the last 15 meetings between the two teams. The Celtics have had less success on the road in Cleveland, going 7-13 SU in the previous 20 games played at the Rocket Mortgage Field House.

After losing to Toronto in its first game of the new season, Cleveland is 5-0 SU and ATS in its last five games. The Cavaliers are ranked second in scoring defense in the NBA allowing 105.2 points per game. So far this season, Cleveland has only given up more than 108 points one time. That occurred in the game versus Boston last week. In the last five games between Boston and Cleveland, the Under is 4-1.

The Under has been the trend for the Celtics so far this season. The total has gone Under in six of the last nine games overall for Boston. The Under has also hit in four of the Celtics last five road games.