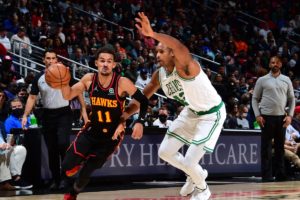 The Boston Celtics will play the Atlanta Hawks on the road tonight looking to win their eighth straight game. The Celtics defeated the Oklahoma City Thunder 126-122 on Monday despite some shaky long-range shooting. They erased a deficit of 15 points in the second half. In staging their comeback, Boston forced 20 turnovers and outscored the Thunder 37-26 in the final 12 minutes.

Boston wasn’t very sharp in the first half making just 10-of-37 (27 percent) of their three-point attempts. The Celtics’ bench helped keep them in the game and provided a spark when needed. Payton Pritchard provided some of that spark with 10 points, four rebounds, and two steals in 14 minutes off the bench.

Pritchard hit a three-pointer late in the fourth quarter to cut OKC’s lead to 96-89 heading into the final frame.

Malcolm Brogdon did not play on Monday due to a hamstring injury and he remains questionable for tonight. Robert Williams and Danilo Gallinari remain out for the Celtics while Marcus Smart is probable.

Atlanta has been playing very well as of late. The Hawks have won five of their last seven games. Their most recent victory was a 121-106 win over Eastern Conference leader Milwaukee. All five Hawks starters scored in double figures. DeAndre Hunter led Atlanta with 24 points. It was the sixth time in 14 games that Atlanta’s starting lineup each scored at least 10 points. The loss was the first this season for Milwaukee at home. They had won eight in a row at home before Monday.

Atlanta C Clint Capela recorded a double-double against Milwaukee for the sixth time in the previous seven games with 19 points and 10 rebounds. Tonight’s game will feature two of the NBA’s leading scorers—Trae Young of Atlanta and Boston’s Jayson Tatum, who averages 31.9 points per game.

Young, who averages 26.9 points per game, and the Hawks will have to contend with a Boston defense that hasn’t really found its groove yet. The Celtics’ defense isn’t the same with Williams out of the lineup. Last year, Boston had the best defense in the NBA. That’s what propelled them to the NBA Finals.

This season, it has been the offense thus far. Boston has the top-scoring offense in the NBA, averaging 119.5 points per game. They are second in the league in overall field goal percentage (48.4%) and third in three-point field goal percentage (38.9%). Not surprisingly, the Celtics are trending Over in-game totals. Six of their last eight totals have gone Over and their O/U record for the season is 9-5.