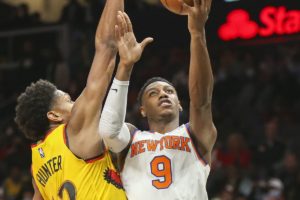 Trae Young is back with the Atlanta Hawks. Young missed a game with a sore shoulder. Missing the game wasn’t a big deal, but not attending a home Hawks game was. Young looks to put more distance between the issue with another big win over one of his favorite rivals, the New York Knicks. It will be a rematch of last year’s Eastern Conference quarterfinal playoff series.

Due to a right shoulder injury, Young missed Friday’s 117-109 victory over the Denver Nuggets. According to sources, Young’s absence was due to a disagreement with head coach Nate McMillan on Friday morning. McMillan wanted Young to attend the pregame shoot-around and undergo treatment for his shoulder during the walkthrough.

Young requested medical attention at the shoot-around, and McMillan reportedly told him that he could either play on Friday off the bench or sit out. McMillan claimed on Monday that he had never given Young such a deadline.

Young returned to the Hawks lineup on Monday and posted a double-double, but Atlanta lost to Oklahoma City 121-114. Young scored 23 points and dished out 10 assists in the loss. For the season, Young is averaging 27.6 points and 9.6 assists while playing 35.5 minutes a game.

The Knicks haven’t played since Sunday, when they defeated the Cleveland Cavaliers 92-81 to complete a four-game home stand. New York is not looking forward to playing against Young. In 14 regular season games, the Hawks guard has averaged 27.9 points and 9.2 assists against New York. In the playoff series last year, Young scored 29.8 points and dished out 9.8 assists per game as Atlanta eliminated the Knicks in five games.

Sunday’s win over Cleveland ended the Knicks’ five-game home losing streak. New York lost to Dallas 121-100 on Saturday night after being outscored by 28 points in the second half. The win over the Cavs was the team’s first victory this year over a team that was competing for a playoff or play-in tournament position.

The 81 points they allowed on Sunday was a season-low. It brought back memories of head coach Tom Thibodeau’s first two seasons in New York. The Knicks ranked No. 1 and No. 6 in points allowed during those seasons. New York currently ranks 20th in points allowed giving up 115.0 per game.

The Over is 8-3 in Atlanta’s last 11 road games. The Under has been the trend in this series. Seven of the last ten head-to-head meetings have gone Under. When playing in New York, five of the last six Hawks-Knicks games have resulted in the Under. The last ten games in the series have averaged 204.6 points per game. The last three have averaged 221.3 and the one game this season ended with Atlanta winning 112-99. That final score was way Under the posted total of 233.