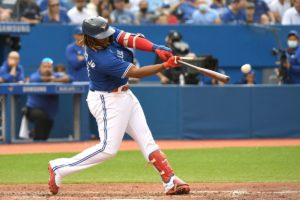 The battle for the AL East begins. After both Toronto and New York went 2-1 in their season-opening series, the two teams will meet tonight at Yankee Stadium. Both Toronto and New York are among the favorites to win the division, the AL pennant, and the World Series. They have each proved they have what it takes in terms of run production. The question is if the two teams’ pitching rotations are up to the task.

In three games so far, no Yankees starting pitcher has lasted more than four innings. That includes ace Gerrit Cole who started the season opener. The Yankees bullpen has done a great job so far, but New York will need its starters to start putting up solid five- and six-inning performances if they are going to contend for any title.

Jameson Taillon will get the start for the Yankees tonight. Taillon ended the 2021 season going 8-6 with a 4.30 ERA. He did show some promise last season though. After a pretty shaky start in April last year, when he went 0-2 with a 6.23 ERA, Taillon came back in July to show what kind of pitcher he can be. For the month of July, he went 4-0 and posted an ERA of 1.16. That’s what Taillon is capable of and he’ll need it tonight.

Toronto’s lineup is full of power starting with AL MVP candidate Vladimir Guerrero Jr. The Blue Jays star is off to another great start in 2022. He’s batting .455 with a home run and four RBIs. Guerrero isn’t the only one though. Both Bo Bichette and George Springer are hitting .308. The surprise for Toronto so far has been catcher Danny Jansen who is 4-of-7 (.571) with two home runs. So far, the Blue Jays are averaging 6.6 runs per game.

The Toronto lineup will support starting pitcher Alek Manoah, who had an outstanding rookie season in 2021. Manoah went 9-2 last season and posted an ERA of 3.22. He needs to get off to a better start than the other Blue Jays starters this season. Jose Berrios lasted just 0.1 innings in his start. Hyun Jin Ryu did a little better but still only went 3.1 innings on Sunday. Manoah ended last season on a roll. Each of his last eight starts in 2021 ended up in a Blue Jays victory.

Tonight’s total is set at 9 and it’s easy to see why. The Blue Jays are averaging 6.6 runs and New York is putting up 4.6. Both lineups have a ton of power. Toronto has also given up more runs (23) than they have scored (20) so far this season. Two of the Blue Jays games thus far have totaled 18 runs and, not surprisingly, both of those games resulted in the Over. What’s interesting is that six of the Yankees’ last nine home games have gone Under as have 13 of the last 20 Yankees’ games against Toronto.