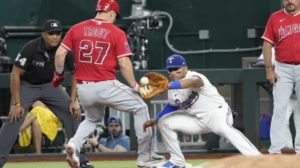 Shohei Ohtani takes the mound tonight for the Angels amid some rumors of a trade. Ohtani and Mike Trout have both been brought up as potential trade targets since the Angels have essentially wasted another season. Trout, who has been out with a rib injury, still has eight years and over $280 million left on his current contract. That makes Ohtani the better prospect for a trade. Regardless, he will be on the mound tonight for the Angels, who have won three of their last four games.

Ohtani is 9-5 with a 2.80 ERA in 16 starts this season. He has 134 strikeouts and was on a roll until his last start against the Atlanta Braves. In the six starts prior to last week’s Braves start, Ohtani won six games in a row pitching 39.2 innings and allowing just two earned runs total. Then, he ran into the Braves machine last Friday and gave up six earned runs in a loss. In six career starts against the Rangers, Ohtani is 3-1 with a 4.26 ERA.

At the plate, Ohtani is hitting .257 with 21 home runs and 59 RBIs. His OPS is .844. Those numbers combined with his pitching numbers make Ohtani a candidate to win a second consecutive AL MVP. Trout has not played since July 12, so Ohtani will need some help from the rest of the Angels lineup.

Texas will start Spencer Howard on the mound. It’s only the sixth start and eighth appearance for Howard this season. He is 1-2 with a hefty 7.11 ERA. Howard took the loss in his last start, a 5-4 defeat at the hands of Oakland. Howard pitched 4.2 innings and gave up four earned runs. Texas has lost each of his last two starts. Howard has pitched much worse on the road than at home. Both of his losses have come away from home and his ERA balloons to 10.54 in road games.

The Rangers have struggled recently winning just once in their last six games. They have also struggled on the road where they are 2-9 SU in their last 11. For the season, the Rangers are 22-28 in road games. What’s notable about Texas playing on the road is their record against the spread. In those 50 road games, Texas is 31-19 ATS this season.

In the last 11 games between these two teams, the Over has cashed a winner eight times. The Rangers rank 13th in MLB in scoring averaging 4.53 runs per game. They were a top-10 scoring team at one point this season. The Angels rank 25th with an average of 3.93 runs per game.