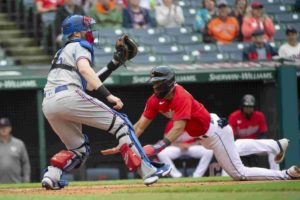 Despite pulling off a win in the second game of yesterday’s doubleheader, the Texas Rangers are fading. They have two wins in their last seven games and today they will face Cleveland’s ace, Shane Bieber. That’s not good news for a lineup that has been struggling at the plate. Over the past seven days, the Rangers are 24th in OPS and 25th in on-base percentage. For the season, Texas ranks 21st and 28th, respectively, in those categories.

Prior to yesterday’s second game, Texas had scored more than three runs in a game just once since May 30. The Rangers rank 19th in runs per game scoring 4.27. After some offseason moves that appeared to improve the Texas offense, the Rangers haven’t produced. The pitching has had its difficulties too. Tonight, the Rangers will start Dane Dunning who is 1-3 this season with a 4.11 ERA. Texas has lost five of his last six starts. Cleveland is by no means an offensive power, but the Guardians do rank ninth in runs per game (4.59).

Texas will have to go up against Bieber, who is much better than his 3-3 record implies. Looking at Bieber’s last four starts, one can see how dominant he has been. In those four starts, Bieber has pitched 28 innings. He has gone at least six innings in all four starts. His ERA in those four games is 1.93 and Bieber has recorded 33 strikeouts. Cleveland went 3-1 in those games.

Where the pitching really breaks down for Texas is in the bullpen. Dunning has pitched at least six innings in five of his last seven starts, but at some point, he will give way to the Rangers’ bullpen. The Rangers bullpen ERA isn’t terrible, but they rank 22nd in FIP over the past seven days. Plus, they had to use several relievers in yesterday’s doubleheader.

Cleveland, on the other hand, has one of the better bullpens in baseball. The Guardians are fourth in bullpen ERA (3.01) and over the last two weeks, Cleveland relievers have a 1.23 ERA which is first in the majors. Over just the last seven days, that number drops to 0.71. The Guardians have the edge in the bullpen.

Four of the last six Cleveland games against Texas have resulted in the game total going Over. The total has gone Over in four of the Rangers’ last five road games. Yesterday’s Game 1 of the doubleheader went Over. Game 2 was a push. Both games ended with a total of nine runs.