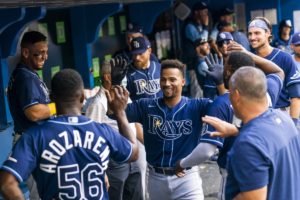 The Toronto Blue Jays and the visiting Tampa Bay Rays will both take overworked bullpens into a five-game series that starts Monday night. The series has huge implications for the American League wild-card race and includes a day-night doubleheader on Tuesday that will put added pressure on both teams’ pitching staffs.

Tampa Bay (78-60) didn’t even get a full inning from Corey Kluber on Saturday and then needed five relievers plus a position player to get drilled by the Yankees 10-3. Then, the Rays followed that up with a disastrous 10-4 loss to New York on Sunday. Starter Luis Patino managed 1.1 innings before getting yanked. Tampa Bay got by with three relievers thanks to five innings from Ryan Yarbrough.

The Rays are now a half-game ahead of the Blue Jays in the AL East standings. Toronto had similar problems with using their bullpen on Sunday. The Blue Jays lost to Texas 4-1 after starting Trevor Richards got chased out of the game after just one-third of an inning. Toronto went on to use six relief pitchers in the loss.

Like Tampa Bay, the Blue Jays had to use four relievers on Saturday too. Starter Kevin Gausman went 5.1 innings and Toronto did end up winning 11-7. Utilizing the bullpen like they did could present a problem over this five-game series with the Rays. Toronto did conclude its 10-game road trip with an 8-2 SU record.

As it stands currently, Tampa Bay and Seattle, which is 79-61, are both a half-game ahead of Toronto in the AL wild-card race. In their first attempt to catch the Rays, the Blue Jays will put Jose Berrios on the mound. The right-hander is 10-5 this season but has a 5.23 ERA. In his career, Berriors is 1-3 with a 5.45 ERA in six career starts against the Rays. Toronto has won each of Berrios’ last four starts.

Tampa Bay will go off the board and give Cooper Criswell his first major league start. The right-hander has made nine starts (14 appearances) with three minor league teams this season. He is 1-1 with a 3.77 ERA. Criswell will have a solid Rays lineup backing him. Tampa Bay has won 15 of its last 20 games. The Rays are also 4-1 SU in their last five against Toronto.

As mentioned, the Blue Jays have won eight of their last ten, but they have struggled against Tampa Bay and at home. Toronto is just 3-7 SU in its last 10 home games. The two teams have trended Over in their last several matchups. Four of the last six head-to-head matchups have gone Over.

Four of the last five Rays-Blue Jays games in Toronto have also gone Over. Six of Tampa Bay’s last nine road games have gone Over. In their last series, the two teams combined for a total of 19 runs, an average of 6.3 runs per game.