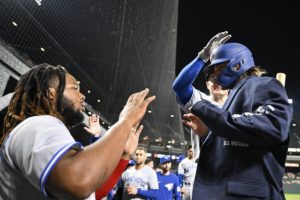 It’s Game 4 of the Rays-Blue Jays five-game series and Toronto can clinch a series victory with a win tonight. The two teams split Tuesday’s doubleheader. Tampa Bay won the first game 4-2 and the Blue jays came back to take the second 7-2. The Blue Jays won the first game of the series 3-2 on Monday.

The series is crucial as Tampa Bay (79-62) and the Seattle Mariners (79-62) are tied behind Toronto (80-62) in the American League wild-card race. Should any of the three remain tied at the end of the season, head-to-head records will determine the final seeding. Tampa Bay currently leads the season series with Toronto 7-6.

Toronto will start right-hander Ross Stripling who is 7-4 with a 3.03 ERA this season. In eight career games (three starts), Stripling is 0-3 with a 4.13 ERA against Tampa Bay. On July 3, he started against the Rays and lost it after giving up four runs (three earned) on seven hits in 4.1 innings. The Blue Jays have won his last two starts in a row. He pitched six innings in each game and allowed a combined five earned runs while striking out 12.

Tampa Bay will go with right-hander Drew Rasmussen who is 10-4 with a 2.57 ERA. Rasmussen faced the Blue Jays on August 2 and pitched six innings allowing just one run. He didn’t get the run support he needed and the Rays lost 3-1. Back in early July, Rasmussen pitched 4.2 innings against Toronto, allowed one run, and the Rays backed him in an 11-5 victory. In six career appearances (five starts), Rasmussen is 1-1 with a 1.59 ERA versus the Blue Jays. In two starts against the Rays in Toronto, Rasmussen is 1-0 with a 0.93 ERA.

Due to back stiffness, the Rays placed Brandon Lowe on the injured list in between games on Tuesday. The second baseman was sidelined early this season for two months due to a stress response in his back. The Rays will need Lowe as well as pitchers Shane McClanahan, Shane Baz, and Tyler Glasnow all back from the injured list if they are going to make a World Series run.

The Under has been the trend for the Blue Jays. The total has gone Under in five of Toronto’s last seven games. The Under has also hit in four of the last five Rays-Blue Jays games. However, when the teams have played in Toronto, five of the last seven have gone Over the total.