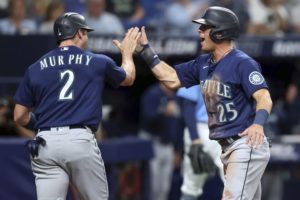 Fresh off a sweep of Oakland, Tampa Bay heads to Seattle looking to do what it did in its last series with the Mariners. At the very end of April, the Rays took two of three from Seattle beating the Mariners twice in one-run games. Seattle just needs a win. The Mariners have won just once in their last eight games. They were swept by Houston in their last series, got shutout twice, and produced just two runs in three games.

Still, things look good for Seattle with Robbie Ray on the mound. Ray was the Mariners’ big offseason acquisition. If the Mariners could hit a little better, Ray’s record might show how good he is. He’s only 2-2 so far this season and his ERA is a bit higher than expected at 4.15, but Ray is still one of the better pitchers in baseball. In his last outing, he did give up three earned runs in five innings but struck out five in a 3-1 loss to Miami. In his first four starts of the season, Ray went at least six innings. He’ll face a Tampa Bay lineup that has been streaky so far this season.

The only Rays hitter that has been consistent all season thus far is SS Wander Franco. He’s batting a healthy .302 with four home runs and 14 RBIs. Last year’s AL Rookie of the Year Randy Arozarena is hitting just .213 and he has yet to hit a home run. Second baseman Brandon Lowe is batting just .194. Having pitched for Toronto, Ray is very familiar with the Tampa Bay lineup. In fact, Arozarena and Lowe have career batting averages of just .118 and .143 against Ray.

Shane McClanahan gets the start for Tampa Bay. He’ll have to deal with J.P. Crawford who is off to a great start in 2022. The Mariners’ SS is hitting .364 with four homers and 10 RBIs. The Mariners tried to infuse the lineup with some hitters and went out and got Adam Frazier and Jesse Winker in the offseason. So far, neither has panned out. Frazier bats just .230 and Winker just .186. Neither player has homered yet this season.

The Rays are 6-2 SU in their last eight games overall. They have not had success against Seattle historically. In the last ten games against the Mariners, Tampa Bay is just 3-7 SU. When playing on the road in Seattle, the Rays are just 3-13 SU in the last 16 games.