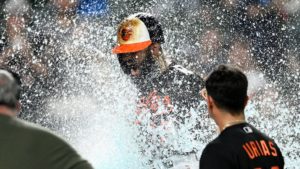 After winning 10 straight games, the Baltimore Orioles have cooled off winning just two of their last six games. Part of it has been the competition. The O’s lost two of three games to the Yankees over the weekend and two of three to Tampa Bay just before the All-Star break. Now, the Orioles get the Rays again for a four-game series to start the week.

The Rays will start right-hander Corey Kluber who has had a solid season so far. In 18 starts this season, Kluber is 6-5 with a 3.73 ERA. His last start also came against the Orioles just before the break. Kluber pitched six innings and allowed four earned runs picking up a 7-5 win. Kluber has actually won all of his last three starts. He pitched six innings each in a pair of wins over Boston allowing a combined two earned runs. Tampa Bay has won seven of his last ten starts.

The Orioles will go with right-hander Austin Voth, who has split time between relief and starting pitching. Voth has started five games so far this season and is 1-1 with a 3.50 ERA. Baltimore has won four of those starts including one against Tampa Bay on June 19. Voth only pitched 2.2 innings, but he didn’t allow a run, and the Orioles won 2-1. Voth’s last appearance was actually last week against Tampa Bay. He came on in relief, pitched 2.1 innings, and allowed just one hit. For the season, his overall ERA is 3.42.

Over the last 15 days, both teams have been playing well at the plate. They both rank in the top 10 in batting average, OBP, and OPS. The Rays came back after the break and beat Kansas City 7-3 but then dropped the two remaining games of the series. The Orioles put up six runs each in the first two games of their series with the Yankees. They lost the first 7-6 and won the second 6-3. The O’s were shutout 6-0 on Sunday.