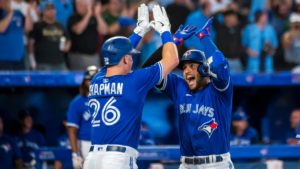 The Cardinals will face Toronto once again after a disastrous 10-3 loss last night. Not having Paul Goldschmidt and Nolan Arenado really showed last night. Both Cardinals stars have not received the COVID-19 vaccination and, as a result, are not permitted to enter Canada. Without the pair, St. Louis could only plate three runs, and the Cardinals’ pitching really failed as the Blue Jays went off and won their seventh straight game.

The Blue Jays have now scored a ridiculous 68 runs in their current seven-game winning streak. Among those seven wins was the 28-5 blowout of the Boston Red Sox. With its sudden increase in scoring, Toronto has moved into third place on the runs per game list. The Blue Jays average 4.93 runs per game. They will have the opportunity to put up big numbers tonight once again. They face Cardinals veteran right-hander Adam Wainwright.

Wainwright has been somewhat effective this season with a 3.40 ERA. He is only 6-8 though and the Cardinals have lost each of his last four starts. In his last start, Wainwright pitched 5.1 innings and allowed a whopping seven earned runs in a loss to Cincinnati. The Reds are certainly not an offensive juggernaut like the Blue Jays. That could be bad news for Wainwright.

St. Louis pitchers have had it rough since the All-Star break. The Cardinals have won just one of four games since the break. In the three losses, St. Louis has surrendered a total of 25 runs. If that continues, the Cardinals are in for a rude awakening. Interestingly, while Wainwright’s ERA is respectable his xERA is 4.48 which suggests he is getting lucky at times.

Toronto will counter with Kevin Gausman who has numbers similar to Wainwright. His ERA is a solid 3.00 with a FIP of 1.98. Gausman ranks in the top one percent of pitchers in chase rate which means he has been able to tame opposing hitters. The issue has been run support. As a result of a lack of offense, Gausman is 7-7 for the season. What he needs is offensive output like his last start. Gausman happened to be the starter in the 28-5 win over Boston last week.

The Cardinals bounce back well with a 25-10 record in their last 35 Game 2s of a series. St. Louis is only 1-7 SU in its last eight games against an AL opponent. The Cardinals have also trended Under recently. The total has gone Under in 12 of the Cardinals’ last 18 games and seven of the last nine on the road. On the road against Toronto, the Under is 5-1 for St. Louis.