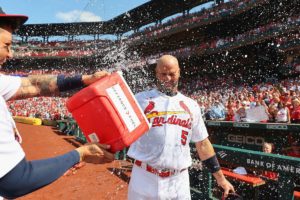 The Milwaukee Brewers will use right-hander Brandon Woodruff on Wednesday to wrap up a two-game series against the visiting St. Louis Cardinals as they attempt to advance to the postseason. After defeating the Brewers 6-2 in game one of the series to clinch the National League Central title, the Cardinals may be feeling at ease. By defeating the Brewers, St. Louis secured a postseason berth for the third consecutive year.

For six innings last night, St. Louis starter Miles Mikolas gave up just one run, while the Cardinals’ Andrew Knizner hit a two-run home run. Due to a right groin injury, starting pitcher Adrian Houser left the game for the Brewers in the fourth inning. Prior to their final meeting on Wednesday, the Cardinals (90-65) had a 10-8 season series advantage over the Brewers (82-72). Milwaukee desperately needs a victory if they are going to have any shot at securing a playoff berth.

As the Phillies suffered a 2-1 loss to the Chicago Cubs, Milwaukee stayed 1.5 games behind Philadelphia (83-71) for the third and final National League wild-card spot. While Philadelphia plays its final nine games on the road, the Brewers play their final eight games at home.

Opposite Woodruff will be Jose Quintana, the hot St. Louis left-hander, for the Cardinals. Quintana is 6-6 on the season with a very respectable 2.91 ERA. Quintana, who was acquired from the Pittsburgh Pirates at the trade deadline, has made 10 starts for St. Louis and is 3-1 with a 2.14 ERA. He made his most recent start on Friday, pitching 6.2 innings without allowing a run in an 11-0 victory over the Los Angeles Dodgers, extending his scoreless streak to 17.1 innings.

Against Milwaukee, the left-hander will make his 21st appearance (20th start) of his career, but it will be his first with the Cardinals. The Brewers are the team he has won the most games against, 9-4 with a 2.95 ERA. In two previous encounters with them this year, he had no decisions and a 4.82 ERA. In

The Cardinals are now 6-3 SU in their last nine games against Milwaukee. St. Louis is also 9-4 SU in the last 13 against the Brewers on the road. Milwaukee is 4-2 SU in its last six games but only 1-4 SU in the last five games played at home. After last night’s total went Under, the O/U record in the last 10 head-to-head meetings is 3-6-1.