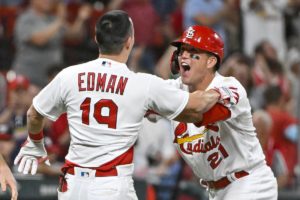 The Milwaukee Brewers are not out of it just yet. As they begin a two-game series against the visiting St. Louis Cardinals on Tuesday, the Milwaukee Brewers will rely on right-hander Adrian Houser to help them in their quest for a wild-card spot. The Brewers are 1.5 games behind Philadelphia for the final National League wild-card position. Milwaukee is in danger of missing the postseason for the first time since 2017. The Phillies own the tiebreaker over the Brewers.

Right-hander Miles Mikolas (11-13, 3.35 ERA) will face off against Houser (6-9, 4.62 ERA) for the Cardinals, who are currently leading the NL Central by 6.5 games over Milwaukee. With a 2-1 loss to Cincinnati on Sunday in their final road game of the year, the Brewers failed to sweep the series. Milwaukee has nine straight home games left, including three versus Arizona, four against Miami, and two against the Cardinals.

Houser has made four starts this month and is 2-0 with a 2.89 ERA. In those 18.2 innings, Houser has only struck out three batters and he has walked eight. He hasn’t allowed a home run during that time either. The Brewers have won Houser’s last four starts in a row. Milwaukee beat both New York teams in Houser’s last two starts. In his last trip to the mound, Houser pitched 4.2 innings without giving up a run in a 6-0 win over the Mets.

In 13 games versus St. Louis in his career, including 10 starts, Houser is 4-4 with a 2.89 ERA. In two starts this year against the Cardinals, he is 0-2 with a 5.59 ERA, surrendering nine runs (six earned) in 9.2 innings. Mikolas has lost each of his previous three starts and, over his last seven starts; he has a record of 2-4 with a 3.07 ERA. In his last appearance, a 1-0 loss to San Diego on Wednesday, he was given the loss despite only giving up one unearned run on three hits in six innings.

The Brewers are 4-1 SU in their last five games. The total has gone Under in four of the Brewers’ last five games. That has been the trend for St. Louis too. The Cardinals have seen the total go Under in eight of their last 12 games. Over the last ten meetings between the two teams, the average final score has totaled 7.2 runs.