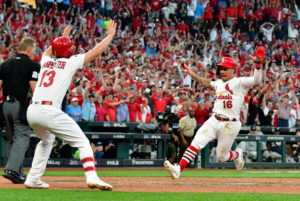 One of the most consistent pitchers in baseball has been Atlanta left-hander Max Fried. He has been outstanding all season long. The Braves have won his last eight straight starts and 12 of the 16 that he started this season. Fried is 8-2 so far this season and carries an impressive 2.66 ERA. That’s right in line with his xERA of 2.81 and his other advanced metrics indicate that his performance this season has not been a fluke. Tonight, he will take on the St. Louis Cardinals in the third game of this four-game series.

The Braves have taken each of the first two games of the series. That gives the Cardinals three consecutive losses and five defeats in their last six games. In their five recent losses, St. Louis has averaged just two runs per game. That’s a far cry from their 4.66 per game average for the season. The Cardinals rank ninth in MLB in runs per game.

St. Louis will need to produce tonight but that will be difficult against Fried. In Fried’s last eight starts, he has given up either 0, 1, or 2 earned runs in seven games. The Cardinals have some of the best hitters in the National League. MVP candidate Paul Goldschmidt is second in MLB with a .340 batting average. He also has 19 home runs. Teammate Nolan Arenado is also a top-25 hitter with a .296 batting average. Arenado has 17 homers to his credit.

The Cardinals will also need a stellar performance from starting pitcher Miles Mikolas. He is 5-6 on the season, but his ERA is actually a hair better than Fried’s at 2.61. What makes Mikolas different than Fried is that his advanced metrics do not back up his low ERA. Mikolas’s xERA is 3.37 which points to some negative regression.

Mikolas actually ranks in the 7th percentile in whiff rate. He doesn’t generate a lot of swinging misses. That could be bad news against a Braves lineup that is pretty good. Atlanta ranks fourth in MLB in average runs per game at 4.77. The Braves have scored 6 and 7 runs in the first two games of this series. Atlanta has won four of its last five games and has averaged over six runs per game in those wins.

In addition to being 4-1 SU in their last five games, the Braves have won five of the last six against the Cardinals at home. Atlanta is 26-17 at home this season and they are 40-19 when playing as the favorite.

St. Louis has just one win in its last six games. The Cardinals are 1-4 SU in their last five games on the road. Plus, they have dropped the last six straight games they have played against Atlanta.